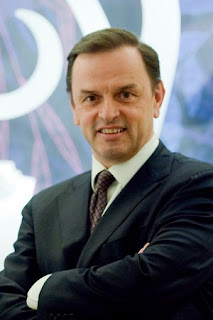 Do comunicado do Richemont Group:

“Over the last decade, Bernard Fornas has led Cartier in an entrepreneurial and highly professional manner. He has been responsible during that period for Cartier’s growth strategy and has overseen its geographical expansion, most notably into new markets in Asia. Under Bernard’s leadership, Cartier has thrived and is now exceptionally well positioned as the world’s pre-eminent international jewellery Maison. This is due in no small measure to the commitment, enthusiasm and hard work of Bernard and the excellent management team that he has built.

Stanislas de Quercize has proved himself to be a highly effective leader at Van Cleef & Arpels and has successfully overseen its development, fully respecting the traditions and heritage of that Maison. I am sure that, under Stanislas’ future leadership, Cartier will continue to build upon its successes to date and maintain its unparalleled position as King of Jewellers and Jeweller to Kings.”

Richemont owns a portfolio of leading international brands or ‘Maisons’, which are managed independently of one another, recognising their individuality and uniqueness. The businesses operate in four areas: Jewellery Maisons, being Cartier and Van Cleef & Arpels; Specialist watchmakers, being Jaeger-LeCoultre, Piaget, IWC, Baume & Mercier, Vacheron Constantin, Officine Panerai, A. Lange & Söhne and Roger Dubuis, as well as the Ralph Lauren Watch and Jewelry joint venture; the Montblanc Maison; and Other, being Alfred Dunhill, Lancel, Net-a-Porter and Chloé as well as other smaller Maisons and watch component manufacturing activities for third parties.
Publicada por Estação Cronográfica à(s) 08:14