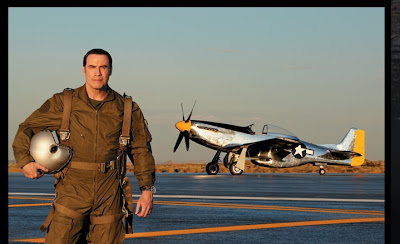 From his earliest childhood, John Travolta has always had two dreams: to fly every day and to wear a Navitimer – the cult model among aviation enthusiasts and professionals. An experienced pilot with over 6,000 flight hours to his credit and certified on eight types of aircraft, he remains more loyal than ever to the “official supplier to world aviation”, with which he shares the same spirit and the same constant quest for performance. In 2012, he stars in the brand-new advert dedicated to the brand with the winged B. The extremely evocative visual shows Travolta standing next to a Mustang P-51; a shot taken by French photographer Frédéric Imbert, on the runway of the Air & Space Port in Mojave, California. The pilot appears wearing the Navitimer with its famous aviation slide rule and its Manufacture Breitling Caliber 01, the world’s best selfwinding chronograph movement. For John Travolta, it is quite simply the most legendary chronograph of them all.
Publicada por Fernando Correia de Oliveira à(s) 18:09