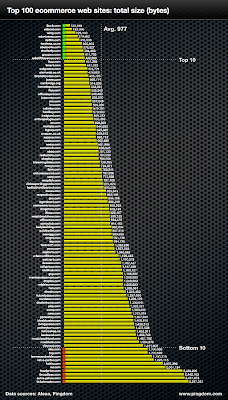 "Performance matters, and if an etailer's site is slow to load, a potential customer may choose to leave and go to another site, resulting in lost sales. It’s not all bad news though in Pingdom's brand new study of the performance of the leading ecommerce sites. We ran the sites through a set of grueling tests to find out which sites are slim and trim, and which ones are slow and bloated. Pingdom studied the top 100 ecommerce sites and analyzed three factors: total size of the homepage, how fast the homepage loads, and how many requests it makes (how many files it downloads)", explica a Pingdom.

"First, when it comes to how big these sites are in terms of total size of the files that need to be downloaded, the spread is quite amazing. The smallest site, iHerb.com, is about 5% of the total size of the biggest one, ticketmaster.com. But even at 2.5 MB total size, ticketmaster.com is not that much bigger than the next three sites. On the other end of the spectrum, the second smallest site is adpost.com. Then follows wiley.com and cduniverse.com. What becomes quite clear if you look at the smallest sites in terms of the total size of files loaded is that they are rather sparse when it comes to graphics. What is interesting to note is that the average size of the top 100 sites is just under 1 MB, which is below the average of the web, which is currently around 1.1 MB. Second, when we look at the speed of the top 100 sites, we see a similar spread to what we encountered with regards to the size. The average site loads in 2.3 econds, with the fastest one (cambridge.org) at 0.5 seconds. Here we find a site that really sticks out, and not in a good way", explica a Pingdom.

"Futurebazaar.com takes up last position in the speed ranking, loading in almost 7 seconds. That’s about 1.6 seconds slower than the number-two site, which is trademe.co.nz. However, futurebazaar.com is pretty average when it comes to size, only 1.2 MB, and it makes 101 requests, which is also fairly good in comparison.

Finally, we looked at how many objects or files were loaded for each site. Generally speaking, the lower the number of requests made for different files, the faster a site can run. And that seems to be the case with iherb.com, which only loads 25 files. In contrast, barnesandnoble.com loads in 249 files, the most out of all the top 100 sites.
In summary, web performance is a complex issue, and this study looks at just three variables, each which is relatively easy to isolate and measure. But if we can learn one thing from this study, it is that even if you run one of the top ecommerce sites in the world, there’s still a lot of room for improving the performance of the site.

"About the data: The top 100 ecommerce web sites come from Alexa, and all the performance data was collected with Pingdom’s Free Full Page Test. We ran the test three times between June 11 and 14, 2012, all from our datacenter in Sweden, and we used the average of the three tests in this report. In some cases, where the main page of a site is really only a landing page where the user can click on to the real site, like ikea.com, we tested the full site, for example ikea.com/us/en. Where possible, we chose the US location of the site".