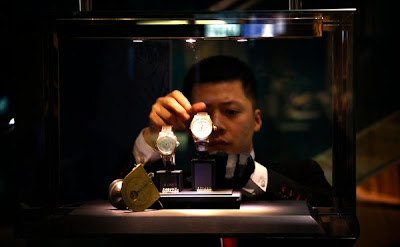 China's market enabled the Swiss watch industry to break all records in 2011 with exports reaching very high level both in value and volume.

Statistics from the Federation of the Swiss Watch Industry show that consumers in Hong Kong and the Chinese mainland spent more than 5.72 billion Swiss francs ($5.907 billion) on Swiss watches in 2011, accounting for 29.7 percent of the total exports of Swiss watches. They rose to 19.3 billion Swiss francs by value, exceeding the annual result in 2010 by 19.2 percent.

The mainland, following Hong Kong and the US, was ranked third place in terms of geographical distribution of Swiss watch exports. The market recorded the highest rate of growth with a 48.7 percent rise in 2011.

The Emperor Watch and Jewellery Ltd, the main subsidiary of the Emperor Group based in Hong Kong, attributed the market's fast growth to the continuously increasing purchasing power of mainland travelers. High-end watches are the most popular luxury items among Chinese consumers and 34 percent of them chose watches for investment and as collectibles, a report on high-end watches in China said.

The report, released by the research center of Fortune Character magazine, also shows that the price of imported high-end watches has increased since 2007 with the average price of them up by 205 percent on 2007 to $6,812 apiece in 2011. According to the center's incomplete statistics, about 70 international high-end watch brands entered China with most of them from Switzerland.

Almost every high-end watch brand has seen a 40 percent annual rise in average turnover in recent years, said Zhou Ting, executive director of the research center for luxury goods and services at the University of International Business and Economics. According to the average growth speed, Chinese consumers will buy more than 200,000 high-end watches in China and overseas in 2012, she added.
Publicada por Fernando Correia de Oliveira à(s) 07:38