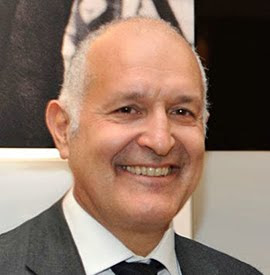 Do comunicado do PPR:

Commenting on this announcement, François-Henri Pinault, CEO of PPR and President of Sowind Group, said: "I am pleased to welcome Michele Sofisti to this new role. Michele has strong management expertise within the high-end watchmaking segment. I am confident that he will be able to develop Sowind Group’s growth on the international market, just as he is successfully doing currently at Gucci Group Watches.”

Michele Sofisti commented: “I am delighted to be offered the opportunity to further develop this high-end watchmaking manufacture, which includes such a prestigious brand as Girard- Perregaux. I am looking forward to work alongside Monica Macaluso and with Stefano and Massimo Macaluso to bring Sowind Group’s growth potential to full fruition.”

Michele Sofisti has extensive experience in the watchmaking industry. Before creating Sofos Management, his own activity devoted to international strategy, marketing and management consulting, in 2005, Michele Sofisti was President of Swatch AG (Switzerland) for five years. He also served as President of Fred Jewellers and Christian Dior watches at LVMH, following his initial experience in the Swatch Group as Vice-President and then President of OMEGA SA. He began his career as a Geologist, then entering Ferrari where he was promoted as CEO of Ferrari Germany. An Italian national, Michele Sofisti earned a degree in Geology from the University of Parma.

Based in La Chaux-de-Fonds, Sowind Group is a Swiss Haute Horlogerie group that includes the Girard-Perregaux and JeanRichard brands, and also Sowind Manufacture, which develops and produces a complete portfolio of high-end watch movements (more than 100 variants) and collections of mechanical watches. The R&D Centre is the cornerstone of the Group and concentrates a large part of investments.

Girard-Perregaux traces its origins back to 1791, and the 220 years of history of the brand are marked by numerous inventions that combine design with state-of-the-art technology, such as the renowned “Tourbillon with Three Gold Bridges” created by Constant Girard in the 19th century. Girard-Perregaux operates worldwide with 500 high prestige sales outlets and 11 boutiques in Asia, the United States and Europe. JeanRichard, a brand dedicated to Daniel JeanRichard (who pioneered watchmaking in the Swiss Jura Mountains during the 17th century) presents an always innovative interpretation of traditional watchmaking. Since July 5, 2011, PPR has become majority shareholder of Sowind Group with 50.1% of the shares, 49.9% being owned by the Macaluso family.