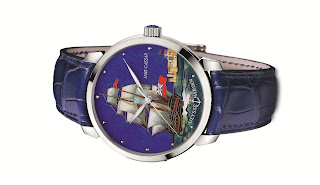 Da marca:
The Majestic class battleship, the HMS Caesar, an eighty-gun ship of the Royal Navy was launched on November 16, 1793. The ship, named after Julius Caesar, was designed by Sir Edward Hunt, and built at the Plymouth Dockyard. It became known as a fierce fighting ship, most notably remembered as one of six British ships in the famous 1801 Battle of Algeciras Bay, between an allied French-Spanish fleet and the British near Gibraltar.

In the Battle of Cape Ortegal in 1805, Sir Richard Strachan in the HMS Caesar defeated and captured a French squadron. And, in 1809, the HMS Caesar, with Captain Charles Richardson as commander, engaged in an attack on a French squadron while blockading the harbors of the Atlantic coast. The HMS Caesar emerged victorious in her many voyages. After being converted to a depot ship in 1841 and proudly sailing for 28 years, the HMS Caesar was demolished in 1921.

Ulysse Nardin pays tribute to this noble Royal Navy seafarer with a timepiece that features the HMS Caesar in all of its splendor, its regal red flag drawing the eye in to view the intricacy of the cloisonné dial. Special in many ways and a collector's item, the HMS Caesar combines a great mechanical timepiece with the lost art of enameling.

With its stately sails blowing proud against a backdrop of deep blue sky and resting on the greenish blue sea, the HMS Caesar impressively represents this complicated technique while also appearing to embody the lively spirit and history of this great vessel. In the process, a variety of colors and tones ― opaque, transparent or translucent ― are derived from the proportions in which the elements are mixed in order to get amalgams, the composition of which is often a secret. Through the ages, this technique has been well-used in watchmaking and desired by collectors.

Remarkably, each segment is divided by a gold wire segment that prevents the liquid powdered enamel to flow into other melting chambers. Over 500mm of fine gold wire is needed to make the cloisons, a practice that requires 50 working hours and 26 processes to complete each cloisonné dial. An authentic representation of the skill and creativity of the enameller specialist, the cloisonné technique applied to the HMS Caesar is one of the most refined and intricate artistic disciplines and is mastered by less than a handful of artists.

The HMS Caesar joins other original and exquisite timepieces in Ulysse Nardin's Cloisonné collection, and is available in a limited edition of 30 pieces each, in 18-karat white or rose gold, and measuring 40 mm in diameter. The self-winding watch is powered by the UN caliber 815 movement that has been COSC Chronometer certified and has a power reserve of 42 hours. Of course, no seafaring timepiece would be worth its salt if it was not water resistant – the awe-inspiring watch is to 50 meters.

The HMS Caesar from Ulysse Nardin stands tall as the ultimate symbol of fine artisan craftsmanship combined with unrivaled mechanical know-how. Undoubtedly, this is a timepiece that is destined to earn its own legendary place in history. 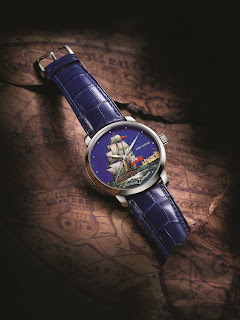