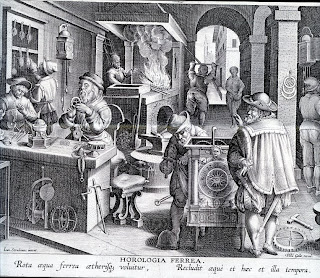 Despite a significant rebound in export sales, 2010 saw Swiss watchmakers continue to reduce staffing levels.
The employers association for the Swiss watch industry said on Tuesday the number of employees working in the industry last year fell by 1.1 per cent to 48,548 people.

Although an improvement on 2009, when staff levels declined by 7.9 per cent, the reduction occurred in a year when the industry rebounded strongly, reporting a 22.1 per cent increase in exports to SFr16.2 billion ($19.45 billion).

The contrasting figures reflected the fact that “2010 was again a year of uncertainty in terms of employment and growth in the sector”, the association said in a statement.

By historical comparison, the number of people employed by the watch industry remains close to its all-time high, 53,000 employees in 2008, and far from the low of less than 30,000 employees in 1987.
Mas, por outro lado:

This week both Richemont and the Swatch Group announced that they would create about 1,500 new jobs to meet strong demand for their products.

“We are actually facing more demand than we can cope with; we have to hire people in all our factories,” said chief financial officer Richard Lepeu.

Richemont’s announcement came only two days after the Swatch Group, the world’s largest watchmaker, said it would need to hire up to 700 workers for a new factory it was building in Boncourt near the French border in northwestern Switzerland.

Swatch created about 1,500 new jobs last year, and expects to meet that figure again in 2011, since it is also expanding its capacity at plants in cantons Solothurn and Vaud.

Unemployment rate
But some analysts say Richemont and Swatch may have difficulty finding the skilled workers they need in a country with an unemployment rate that is the envy of Europe (3.1 per cent in Switzerland against 9.5 per cent for the European Union).

“A few years ago some companies in the watch sector rehired retirees because there were not enough specialists to make the high-end watches,” Felix Brill, senior economist at Wellershoff & Partners in Zurich told swissinfo.ch.

“So this development could lead to some capacity restraints and price increases,” Brill added. “Over the past few years the free movement of people [accord with the European Union] has helped a lot since Switzerland was able to extend its pool of potential workers.”

However, the free movement accord has become a political hot potato. With parliamentary elections on the horizon, parties on the right and left are attacking the deal which grants EU citizens equal access to the Swiss job market.

The rightwing Swiss People’s Party says growth based on immigration is a risky strategy while the centre-left Social Democrats want a minimum salary introduced to prevent wage dumping.

Their demands have been fuelled by a report from the State Secretariat for Economic Affairs (Seco) that last year nearly 40 per cent of Swiss companies that had foreign workers on staff did not respect collective labour accords.

Speaking to swissinfo.ch, Richemont spokesman Alan Grieve agreed that finding enough skilled workers was “going to be an issue”.

Talent pool
“We’re fortunate that all of the factories are located in the Jura region near the French border and there is a pool of talent on both sides of the border in terms of watch making,” Grieve said.

“We know it will be difficult to find 800 skilled people. We’ll have to do some training obviously. Many of them will be new to the industry so we’ll have to bring them up to speed.”

Grieve said Richemont had no official policy on Switzerland’s free movement of people accord with the EU, and there was no question of hiring further afield at the moment.

Finding enough skilled workers is a problem many industries would like to have, and Swiss watch makers remain optimistic that demand for their high-end products will remain strong.

“We’re confident this growth will continue. 2011 will definitely be a positive year unless there is a major natural disaster of some kind,” Jean-Daniel Pasche, president of the Federation of the Swiss Watch Industry told swissinfo.ch.

“And there are no signs of any negative evolutions for next year.”

One reason for the optimism is the fact that expensive timepieces and other luxury goods are impacted less by the strength of the Swiss franc than cheaper products.

According to Brill, the Swiss watch industry will continue to benefit from the booming economies in emerging markets.

“The growth of these economies, especially in Russia and Asia, is very strong. There is a lot of income generated, a new middle class is emerging, and they have a strong demand for luxury products,” Brill explained.

“I think the Swiss watch industry is in a good position to profit from this trend.”