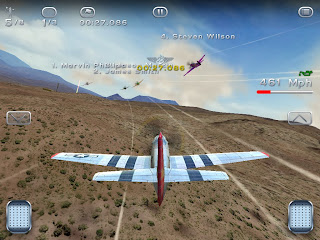 Da marca:
An immersive game brimming with excitement
«Breitling Reno Air Races» will be a huge bonus to smartphones and touch pads. With a breathtaking graphics engine, the game plunges players into an intense universe of faithfully recreated plane races around pylons, providing an opportunity to enjoy an online race with other competitors all over the world.

Players will be able to discover the various plane classifications, starting with the "Unlimited", WW II fighter planes that have been «tuned» for the race, and the "T6" class.

Players will also be able to "customize" their machines to their heart's content, thus personalizing their experience, before launching into the race to become the fastest pilot.

Characteristics:
- Epic races with a rare intensity
- Incredible fully 3D graphics
- Ultra-exact copy of Reno’s ground and race circuits
- Optimized gyroscopic and touch controls
- 3 play options: Quick Play, Single Race and Multiplayer
- WiFi and 3G multi-player function for up to 8 players
- Several classifications of planes and circuits
- Customizable planes: name, style and colors
- Tutorial to learn to fly in a race
- Openfeint compatible
Reno Air Races, the World's Fastest Motorsport
For nearly 50 years, the American «National Championship Air Races», the fastest and most prestigious airplane race in the world and a veritable institution in the world of aviation will take place September 14th to 18th, 2011 in Reno, Nevada and will be viewed by over a hundred thousand spectators from all over the globe. Pilots from 6 different classifications of planes will compete on tracks in the air that are marked off by pylons on the ground over the course of five days. Winning in Reno depends on flying as low and as fast as possible. The famous Breitling "Unlimited" class -Reno's ultimate category – has planes racing in excess of 500 mph, just a few feet off the ground!

To mark this special event presented by Breitling, the brand is offering everyone in possession of an iPhone, iPad or ipod touch the chance of discovering and living the excitement of the Reno races.

Breitling Reno Air Races will be available free of charge and exclusively on iOS platforms at the end of June 2011. Two updates will be made to the game content before the start of the Reno races in September, with further classifications and new airplane models being added.

The launch of the game on Android platforms is scheduled for September 2011, during the official races.