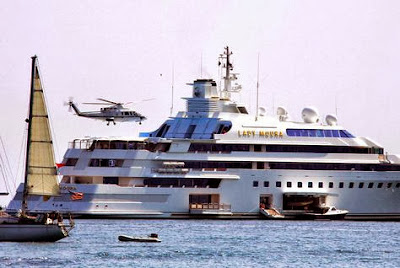 Despite global economic uncertainty, the number of ultra-wealthy has reached an all-time high of 199,235 individuals with a combined fortune of nearly $28 trillion, according to the Wealth-X and UBS World Ultra Wealth Report 2013. This is a 6-percent increase over 2012 and an addition of $2 trillion to their combined wealth, which the report points out is greater than the GDP of India.

The report defines Ultra High New Worth (UHNW) individuals as those with total net assets of $30 million and above.

According to the report there are more than 2,000 billionaires globally with a total net worth of $6.5 trillion, which is equal to 23 percent of the world’s UHNW total wealth. This is more than any other wealth tier despite making up only 1 percent of the UHNW population.

Despite projections that China and Brazil, the fourth and seventh wealthiest UHNW nations in the world, respectively, are among the economies to watch in the near future, these two countries saw a contraction in their UHNW populations and wealth due to economic slowdowns.

Latin America was the only region to suffer a decline, with both its UHNW population and total wealth falling, by 600 individuals and $75 billion respectively.

By contrast, growth was largely due to North America and Europe, with the two regions responsible for a net gain of nearly 10,000 UHNW individuals and a total increase in wealth of $1.5 trillion.

Although the US and Europe grew faster than Asia in the past 12 months, Asia is forecast to produce more UHNW individuals and wealth than both regions in the next five years.

In fact, the report forecasts that at current growth rates, Asia’s UHNW population and wealth will eclipse that of Europe in 2021 and 2017 respectively. Asia will have a larger UHNW population by 2032 and have a greater total wealth by 2024.

The average wealth of an UHNW individual has risen to $139 million, up $1.8 million from last year.
Publicada por Fernando Correia de Oliveira à(s) 16:32