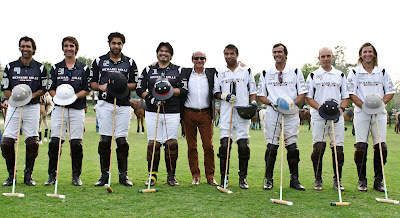 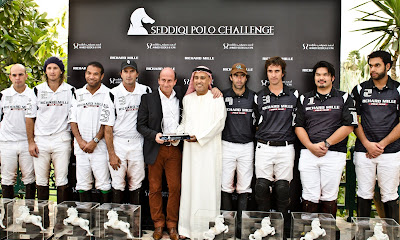 And for the 2012 polo season Richard Mille unveiled at the Salon International de la Haute Horologerie the new RM 053 Pablo Mac Donough Polo Tourbillon featuring a totally new ‘armored’ case in titanium carbide engineered to tolerate the extreme shocks likely to occur during a polo match. Inspired by the iconic tonneau shape the case has two raised arcs leading to two viewing windows unveiling a tourbillon movement tilted at a 30° angle. The seconds run with the tourbillon cage on the left viewing window and on the right the hours and minutes are shown.

Polo is possibly one of the toughest sports for any tourbillon watch to have to deal with; sudden turns, wild swings, the clash of horses and riders, these are forces far greater than the norms found in other sports. Known as the ‘king of sports’ polo is uniquely elegant and highly physical. 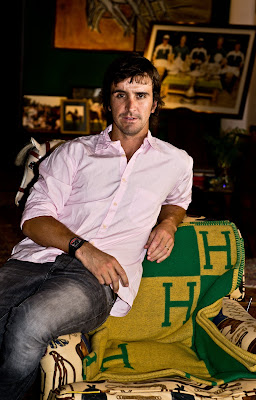 The Richard Mille Team made its debut in polo in May 2011 completing a successful first season in UK’s most prestigious tournaments such as the Queen’s Cup and the Gold Cup, and culminating with the victory of Silver Cup in Sotogrande, Spain.

Pablo Mac Donough began playing polo at only 6 years old in the Nueva Escocia Polo Ranch, Buenos Aires, where his father breeds his own horses. At 23 Pablo Mac Donough became part of La Irenita where the breeding program for polo horses is held. His career kicked off in 2001 when he won the Camara de Diputados Cup in Buenos Aires. In 2003, he began playing for Ellerstina, one of the best Argentinean Polo teams of the last decade, where he played eight seasons and won the 2010 Argentinean Triple Crown to become Number One of the World Polo Tour Ranking. In May 2011, he joined the elite crowd of the Richard Mille Polo Team alongside H.E Bahar Jefri and secured the team’s first victory in with the Silver Cup in Sotogrande. Last December, Pablo Mac Donough won the Argentinian Open confirming yet again his
position as World Number One.

Established in 1950, Ahmed Seddiqi & Sons is a family owned and run business synonymous with exquisitely designed watches. From its humble beginnings as a single store in Souk Bur Dubai, Ahmed Seddiqi & Sons has thrived to become the largest retailer of Swiss Brand watches in the Middle East, boasting a portfolio of over 50 prestigious brands across 52 locations in the UAE. The passion for luxury Swiss watches is deeply embedded in Ahmed Seddiqi & Sons family. The Board of Directors and Executive Committee is comprised of the second, third and fourth generation of the Seddiqi family.
Publicada por Fernando Correia de Oliveira à(s) 19:58