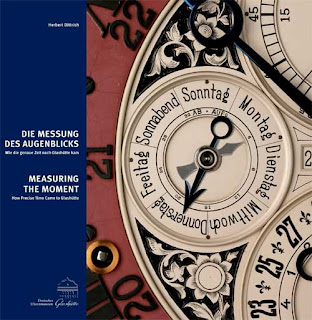 The History of Timekeeping and Watchmaking in Glashütte in Saxonia (Germany) 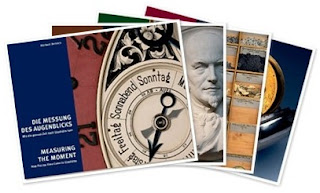 The small town of Glashütte, some 15 miles south of the city of Dresden (the capital of the Saxonia region of Germany), has had a significant horological history since 1845, and has been the center of high-grade watchmaking in Germany ever since. While Dresden always had a marvelous horological museum (the Mathematisch-Physikalischer Salon, successor to the private collection of the Dukes of Saxonia) until recently Glashütte lacked a watch museum. Thanks to the generosity of the Nicolas G. Hayek Foundation that changed a few years ago.

The Deutsches Uhrenmuseum Glashütte now now published its first major publication, a series of –so far- four books dealing with the early history of timekeeping and watchmaking in the region. The most unusual feature about them is the chosen format: Firstly they are unusual in that their text is fully bi-lingual, each page featuring the German original text on the top half of the page, and a full English translation (in a different font) on the bottom half. Secondly, the material is presented in a highly structured manner. For instance, Volume 01, covering 120 pages, is divided into 9 sections, which together are made up of 49 ‘mini-chapters’. As there are also over 100 illustrations in the volume, some ‘chapters’ consist of barely a short paragraph.

The overriding theme of the whole series is ‘precision”: the first volume deals with the concept of ‘precise time’ and time standards, the second summarizes the worldwide quest for precise timekeeping up to about 1870, with an emphasis on regional contributions from Saxonia. The third book focuses on the contributions of the regional early precision pioneers J.G. Koehler 1745-1800, J.H.Seyffert 1751-1818, and J.C.F.Gutkaes 1785-1845. The fourth volume examines the first 50 years (1845-1895) of watchmaking in Glashütte, particularly the contributions of F.A. Lange. While never stated explicitely, it can be assumed that the series will be continued to cover the 20th century, as well as possibly the present production of high grade watches in Glashütte.

The whole series highlights timekeepers (and other objects, as well as documents) which are in the collection of the Museum in Glashütte (and in other regional museums), many of which have never appeared in publications before. Just browsing through the books, looking at the images and reading a paragraph here and there is a most pleasant and rewarding experience for any enthusiast interested in high grade watches or precision timekeeping. Reading the books cover-to-cover (especially the first two volumes) however was less satisfying – at least for this reviewer- as much of the material has been presented in other publications before, and the efforts to tie it to Saxonia at times seemed somewhat contrived.

Studying volumes 03 and 04 felt much more rewarding, as much less has previously been published on the precision clock and chronometer makers of Dresden. Admittedly much of what volume 04 covers is described in Meis: A. Lange & Sohne – The Watchmakers of Dresden (ISBN 2940019-23-1, English Edition 1999: Antiquorum), but that book is hard to find for prices under $300, and offers more detail on Lange history than most non-specialist readers would want. Dittrich’s text offers some of the human history, but focuses on the early technical history of the Lange brand of watches, giving significant details on the development of the chronometer grade escapements using both detent escapements and lever escapements. That section is particularly rich in illustrations, including ultra close-up photography and schematics clearly explaining the finer points of developing improvements in watch escapement technology. “Beginning of a Tradition” (i.e. Volume 04) is a ‘must-buy’ for any serious collector of pocket chronometers, as well as for students of horological history who focus on high grade watches.

This reviewer looks forward to future volumes of the series, which hopefully will cover products from Glashütte which were made in the early 20th century. And congratulations to theFoundation Deutsches Uhrenmuseum Glashütte on their first publishng venture. We can only hope that more museums find the funding to publish this kind reasonably priced, but scholarly sound horological literature.

I simply could not depart your website prior to suggesting that I actually enjoyed the usual info an individual supply to your guests? Is going to be again ceaselessly to check up on new posts
Chemware D1069045 PTFE 400mL Evaporating Dish