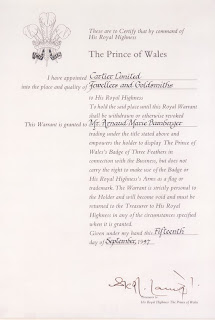 A unique bond, a creative alliance and entwined destinies...
“Cartier: jeweller of Kings, king of jewellers!” This declaration has long sealed the bond that ties Cartier to the Royal Court of the United Kingdom. Pronounced in 1900 by the Prince of Wales and future King Edward VII at the Cartier boutique at 13 Rue de la Paix during one of his frequent visits to Paris, it heralded a unique and rare alliance between the jeweller and the Royal Court of the United Kingdom, which delivered its first royal warrant of appointment to Cartier in 1904.
Both parties remained faithful to this bond throughout the century that followed: Cartier created 27 tiaras for the coronation of King George VI in 1937, and also produced the “Edelweiss” brooch in 1952, which was presented to HRH Queen Elizabeth II to mark her coronation. It has also been a committed and exclusive partner of the polo tournament held each year in Windsor in the presence of members of the Royal Family since 1985, while in 1991, the Queen Mother visited the London craftsmen working at Cartier’s London workshops, known as “The English Art Works”, to pay homage to their expertise, as Queen Mary and Princess Margaret had done before her.

The crossed destinies of Cartier and the Royal Court of the United Kingdom in a few major dates:

1900: the date on which Cartier was crowned with the famous declaration,“Cartier: jeweller of Kings, king of jewellers!”

1922: Cartier opened its own workshops, known as “The English Art Works”, in London. Since then, they have received visits from various members of the Royal Family, including Queen Mary in 1929 and Princess Margaret in 1962. In 1991, the Queen Mother lunched with the Cartier craftsmen in London in tribute to their expertise.

1937: Cartier created 27 tiaras and other head decorations to mark the coronation of King George VI of the United Kingdom. The Cartier designers demonstrated particular skill in their use of coloured semi-precious stones such as topaz and aquamarine combined with diamonds. The elegant platinum settings were convertible, which meant that the central motifs of the tiaras could be detached and worn as brooches.

1952: coronation of HRH Queen Elizabeth II. She received a Cartier diamond brooch mounted on platinum as a gift. This brooch, known as the “Edelweiss”, features the famous Williamson diamond, a pink brilliant-cut diamond weighing 23.60 carats.

From 1985 to today: Cartier is the exclusive partner of the polo tournament held in Windsor every year on the last Sunday of July. The presence of members of the Royal Family and numerous celebrities attracts the media from all over the world. Charles, Prince of Wales and Princes Harry and William are all keen polo players who attend this exclusive sporting event.
Publicada por Fernando Correia de Oliveira à(s) 12:02