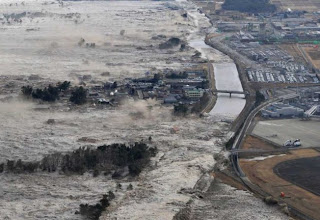 Lido no Swissinfo:
Swiss Re estimates Japan costs at $1.2 billion

Zurich-based reinsurance giant Swiss Re has estimated its costs from the Japan earthquake and tsunami will top $1.2 billion (SFr1.09 billion).
But the company, the world’s number two reinsurer, warned the estimate was subject to change due to the high degree of uncertainty about events unfolding in Japan.

The estimate comes just weeks after the company predicted costs from the February earthquake in New Zealand would reach $800 million.

Swiss Re said it did not expect to realise significant costs resulting from events at the Fukushima nuclear power plant.

Residential properties are covered by a government scheme which is not reinsured on the international markets, Swiss Re said.