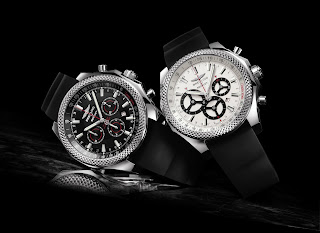 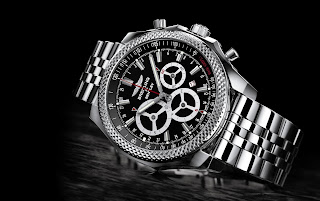 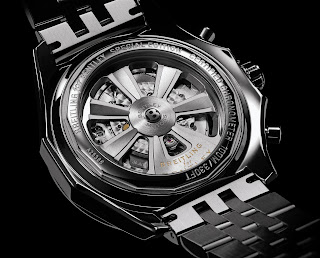 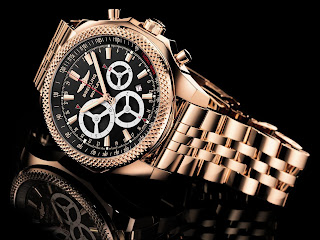 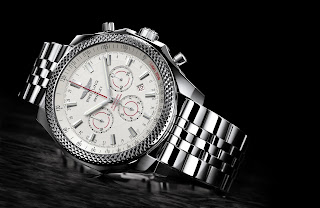 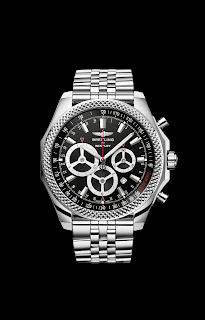 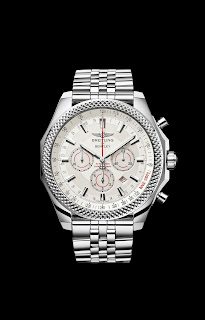 Breitling for Bentley is lining up two exceptional champions on the starting grid. named in honour of the most famous of the Bentley Boys, who was also the first driver to win three consecutive editions of the le mans 24 hours (1928, 1929 and 1930), the Bentley Barnato and the Bentley Barnato racing chronographs are distinguished by their peerless performances and their resolutely out of the ordinary design. they feature ultra-sporty dials, including one with a highly original disc-type totalizer system. the understated and powerful case is topped with a broad bezel bearing a raised knurled motif inspired by Bentley control buttons. equipped with transparent sapphire crystal casebacks, these top-class instruments reveal a truly unique vision through the reverse side, in the shape of anoscillating weight evoking the wheel rims of the new Bentley continental gt. In terms of motorisation, they certainly have what it takes to win the race towards precision and endurance, thanks to a movement certified by the swiss Official chronometer testing Institute (cOsc), along with a “30-second chronograph” system that is unique in the world. two new Bentley Boys ready to rise to all manner of challenges.

In 1923, Walter Owen Bentley sent one of his speed machines to take part in the first edition of the Le Mans 24 Hours. In 1924, the British firm created a sensation by winning the race with a Bentley 3 Litres – a feat that it accomplished four more times, in 1927, 1928, 1929 and 1930, the two latter victories being earned in a Speed 6. This was the era of the legendary Bentley Boys: Benjafield, Birkin, Davis, Rubin, Kidston and above all Barnato, the most famous of them all, a multi-millionaire diamond merchant. Gifted sportsmen, authentic amateurs, often fabulously wealthy and irresistible charmers, the Bentley Boys raced first and foremost for honour, fired by a taste for challenges. Dedicated as much to partying as to winning, they were to leave an indelible imprint on the Bentley spirit: an unmistakable blend of performance and luxury. In 2003, Bentley revived its glorious sporting past by sweeping the first two places in the Le Mans 24 Hours ranking.

Resolutely Bentley in terms of its design, the Bentley Barnato associates a generously sized case with fixed bezel featuring a knurled raised motif and red-rimmed sports counters – just like on the dashboards of the finest sports cars from the British carmaker. Totally Breitling from a technical standpoint, it combines a selfwinding chronograph movement chronometer-certified by the COSC with an ultra-efficient and ultra-legible “30-second chronograph” system. Its originality extends to the reverse side fitted with a transparent back serving like an open car bonnet to reveal a wheel-rim shaped oscillating weight. Available with a black or silver dial enhanced by applied hour-markers and tone-on-tone counters with a refined spiral motif, the Bentley Barnato comes in steel as well as in a 500-piece red gold limited edition. It can be teamed with a leather, crocodile leather or rubber strap, or with the particularly sturdy and comfortable Speed bracelet.

The Bentley Barnato Racing special series features a spectacular design that makes it the most original of all Breitling for Bentley chronographs. The pointer-type counters are replaced by a highly original disc-type counters system displaying the hours and minutes of the measured time by means of two red triangles. The openworked shape of the silver-toned discs is reminiscent of the steering wheels on the famous Bentley models that won the Le Mans 24 Hours race five times between 1924 and 1930 – thanks to Barnato and the other Bentley Boys. The “30-second chronograph” serves to measure the best laps to the nearest 1/8th of a second. The oscillating weight inspired by the wheel rims on the new Continental GT provides a maximum of energy to the COSC chronometer-certified movement. Carved in steel for the standard version, the Bentley Barnato Racing takes on an even more exclusive aura in a 500-piece red gold limited edition.
Publicada por Fernando Correia de Oliveira à(s) 11:17