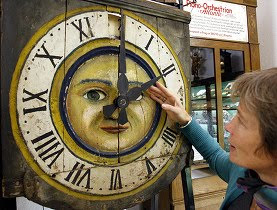 The move in 1981 was hotly disputed, especially as a majority of Swiss voters had voted against messing with the clocks in 1978. But with all its neighbours making the switch, Switzerland couldn’t afford to be out of step.

The latest politician to take up the cause is Yvette Estermann of the rightwing Swiss People’s Party. However her parliamentary motion to scrap Summer Time only garnered a handful of votes last autumn.

Lucerne-based Estermann argues that moving the hour forward and back is costly and inefficient and causes unnecessary disruption and suffering. “Sleep disturbances and heart attacks are the result,” she said in her blog in February.

She claims that many mental and physical illnesses may have their origins in the time change because it interferes with the body clock.

Then there is the increased risk of accidents, which are the biggest problem, according to Dr Johannes Mathis of the sleep research centre at the Insel Hospital in Bern.

“Vehicle accidents on the streets rise significantly, particularly on the Monday after the change. When people have to go to work during rush hour, there are several factors converging – including one less hour of sleep two nights before, the change of the inner clock and the fact that it’s darker in the morning,” Mathis told swissinfo.ch.

Estermann is not the only one to be concerned about changing time. From this year Russia will stop putting its clocks back in winter and leave the time unchanged all year round.

Russian President Dmitri Medvedev announced the decision in February saying that the need to adapt to the time change each year was causing Russians “stress and illness”.

“This really disturbs the human biorhythm,” said Medvedev. Summer Time was also introduced in the Soviet Union in 1981.

The idea of buying an extra hour of daylight for summer evenings was pushed by enthusiasts at the end of the 19th and beginning of the 20th centuries. The initial argument of making the most of daylight hours was later reinforced by claims of energy-saving benefits, particularly less need for electric light in the evening.

As Mathis pointed out, there are social reasons for shifting the clocks as well.

“People like to sit in a café and enjoy the sun at the end of the day. This is OK for social purposes, but with respect to sleep and biological rhythms, I almost have to say it’s nonsense,” he said.

Switzerland followed other European countries in trying out a Summer Time change during the Second World War with the aim of saving energy. The experiment was dropped after two years.

Summer Time became topical again after the 1974 Energy Crisis when France and Italy re-introduced it.

When the Swiss government tried to follow suit, the farming lobby sprang into action and gathered enough signatures to call a referendum on the issue. How could the cows suddenly be milked an hour earlier, they argued.

Swiss voters opted to leave the clocks alone but things quickly got a lot more complicated when Germany and Austria introduced summer time in 1980.

Switzerland had to operate a separate time zone from all its large neighbours for five months, a situation the government moved swiftly to correct.

Although farmers 30 years ago were firmly opposed to Summer Time, they have now come to accept and even enjoy it, according to a Swiss Farmers Union spokeswoman.

“From the farmers‘ point of view it really doesn’t cause any problems. Yes the cows are used to being milked at the same time every morning but the farmer can introduce the change gradually over a few days to lessen the impact,” Sandra Helfenstein told swissinfo.ch.

“Farmers are also glad to have a little extra daylight in the evening to finish work or relax of course,” she added.

But leaving aside the cows, is there any substance in the worries about health effects on humans of shifting time?

A 2008 Swedish study found a five per cent increase in heart attack cases in the week following the switch to Summer Time but sleep specialists say the majority of people overcome the mini jetlag in two to three days.
Publicada por Fernando Correia de Oliveira à(s) 18:50