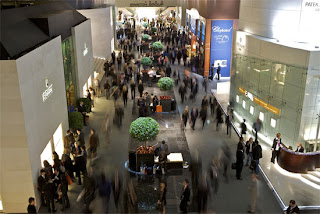 Lido no Swissinfo:
Makers, sellers and lovers of exclusive watches and jewellery are gathered in Basel for the eight days of the prestigious Baselworld fair.
The mood is buoyant, but Baselworld 2011 is being held against a backdrop of natural disaster and political upheaval in some parts of the world which are traditionally important markets for Swiss watches.

“I remain optimistic, and I think that in 2011 the Swiss watch industry will probably break through the symbolic SFr17 billion ($18.7 billion) barrier [of exports] as it did in 2008, and – why not ? – exceed 18 billion,” François Thiébaud of Tissot told swissinfo.ch.

Baselworld 2011 will show whether the trend of the past few months is confirmed. The Swiss watch industry had the best February in its history, and has exported items worth SFr2.6 billion since the beginning of the year, up 18 per cent on the previous year.

Sylvie Ritter, the fair’s director, described the challenge currently facing the industry as being “to produce all the watches required in the world as a whole”.

Jacques Duchêne, who for years has chaired the exhibitors’ committee was also upbeat about the “positive context”, but added that “even if the trend seems to be going in the right direction, the uncertain geopolitical situation warns us to be prudent in our analyses”.

In his opening speech, Burkhalter highlighted the importance of the Swiss education, research and innovation systems, talking of “a real jewel of our society”. He described them as “creating the future” for Swiss youth and the planet.

He drew attention to international rankings which showed that in this respect Switzerland did very well. He added, however, that there was nothing worse than a young generation without prospects for education or employment.

To this end, he said he wanted to give education, research and innovation “absolute priority”.

All those who spoke at the media day on Wednesday expressed their sympathy with Japan after this month’s earthquake and tsunami. But Japanese watchmakers do not seem to have switched course. All 12 major brands are present.

In February, Japan was the ninth biggest destination for Swiss watches, where the market had grown by 3.4 per cent, or SFr62 million over the year before. How much of an impact recent events will have remains to be seen.

Thiébaud suggested that overall exports might be affected by less than one per cent, and exhibitors thought the drop would be short-lived.

Last year about 400 Japanese visitors and 80 journalists came to Baselworld. Ritter said she was not aware of any cancellations, but added that it was only at the end that any conclusions could be drawn.

However, there was no comparison with the situation in 2003, when the Sars pandemic (severe acute respiratory syndrome) kept many Asian visitors away.

The Gulf and strong franc

Another source of uncertainty is the unrest in north Africa, which could spread to the Arab Gulf, an important market for Swiss watches.

But again Thiébaud was optimistic. He was just back from Qatar where he had met people from the Gulf emirates and other countries.

“There is less concern there than here. The biggest market in the region is Saudi Arabia, and the situation there is quite normal,” he said.

Exports to Qatar fell by 28.6 per cent in February compared with the same period in 2010, and those to Saudi Arabia by 11.6 per cent.

But Thiébaud put this down chiefly to the strong franc, which has been strengthened yet further by the geopolitical situation and by the effects of the disasters in Japan.

He described the strength of the currency as “a constant concern”.

In fact the rise of the franc has so far had little impact on Swiss exports, but Philipp Hildebrand, head of the Swiss National Bank warmed recently that there could be a delay before the repercussions are felt.

“I can’t predict the future. Anything is possible,” Thiébaud commented.

“But its strong national tradition gives the Swiss watch industry a certain advantage. Emerging countries are growing markets, and they want Swiss products, which reflect know-how and authenticity.”

Back to the past

A brief glance at the items on display shows that the economic crisis has left its mark.

The aesthetics tend to the conservative, and although it is dangerous to speak in blanket terms of trends, Thiébaud agrees that there are more smaller watches, and they are in the more traditional shapes – round or square – many of them harking back to the 1950s and 60s. There are also many two-colour watches (gold and steel).

As far as the mechanics are concerned, tourbillons and perpetual calendars are popular.

“In any crisis, people come back down to ground,” said Thiébaud. “You see a return to true values.”