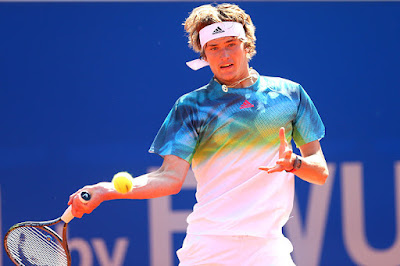 Alexander, who is coached by his father, began playing at the age of five, and in 2013 at the age of 16 was crowned ITF’s World Junior Tennis Champion, a title previously held by some of the greatest names in the world of tennis.

In 2014, Alexander Zverev emerged victorious in his first ATP Challenger tournament, the Sparkassen Open in Braunshweig and two weeks later, was invited to play in the Hamburg ATP 500 event where he made headlines in beating three top 20 players and reaching the Semi Finals where he lost to top 5 David Ferrer.

Zverev’s performance was record setting in addition to being spectacular because it was an achievement that echoed those of a young Rafael Nadal, a familiar figure to clients and employees of Richard Mille.

Sascha’s rise has been exponential. His game, more finely honed with each passing day, carried him into the top 100 players by the end of the 2015 season. The youngest player to be ranked, he received the ATP Star of Tomorrow Award. This season, following Semi Final results in Montpellier and Quarter Final results in Rotterdam, he announced himself on a major stage in Indian Wells where he held a match point against Rafael Nadal, who confirmed his belief that Sascha could be competing for major championships in the future.

After the match, which Nadal won, he declared ‘This is actually a major victory—I was pitted against a great player. In particular, he served amazingly well at the start. His first service were frequently travelling at 214 km/hr and his second service over 193 km/hr.’

Following in the footsteps of this great tennis champion, Alexander Zverev now plays with a Richard Mille watch on his wrist. For this right-handed player who is extremely powerful in his game whilst being comfortable on any surface, the RM 27-01 is the ideal timepiece, with its case made of carbon nanotubes, weighing 18.83 grams, inclusive of the strap—a world record for a mechanical watch- yet to be matched. Developed hand in hand with Rafael Nadal, the tourbillon calibre suspended by cables can resist accelerations of up to 5,000g’s. Designed for tennis, this watch feels like a second skin.
Publicada por Fernando Correia de Oliveira à(s) 14:26