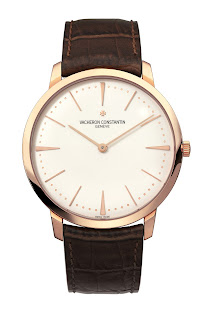 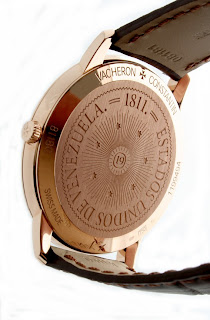 Caracas, Venezuela – August 23rd, 2010 – Vacheron Constantin, the world’s oldest watch manufacture, has created a limited edition timepiece to celebrate Venezuela’s 200th independence anniversary. Production will be limited to 19 pieces: ten in rose gold and nine in platinum. The back of the watch bears an engraving, which includes the number 19 representing the day in which Venezuela declares its independence, April 19th, 1810.

Venezuela's war for independence (1811-1823) was the first in Latin America’s independence movement under the leadership of South American General, Simón Bolívar. It was part of a series of related emancipation movements throughout Latin America. The Venezuelan war was integral to other South American wars of independence as military and political collaboration among countries was common. It is in 1811 that the first paper bill is issued bearing a seal with the number “19” in the center, representing the signing of the independence in April 19, 1810.

Vacheron Constantin has a long history in South America. Already in 1835 the Maison sets up a business in Rio de Janeiro in Brazil. The brand's archives also indicate the first sales to Argentina around 1880. The bonds between Vacheron Constantin and Venezuela will tighten early 20th century, it is in 1922 that the Minister of the United States of Venezuela in Bern and delegate to the United Nations in Geneva asked Charles Constantin to become Venezuela's vice-counsul in Geneva. A position that Charles Constantin accepted with pleasure.

The timepiece chosen for this limited edition is the Patrimony Contemporaine. Designed and crafted according to the most demanding standards of Geneva horology at its finest, the Vacheron Constantin caliber 1400 hand-wound mechanical movement can rightly claim the title of "mouvement manufacture", i.e. a proprietary design born of the experience and expertise of the company's own team of master watchmakers and made on its own premises.

The caliber 1400 which equip this limited edition has received the Hallmark of Geneva certification. This exceptional quality certification is a guarantee of provenance, durableness, exactness and of century old savoir-faire. Here for instance, all appropriately flat areas of the movement are decorated with a ribbed "Côtes de Genève" pattern, sharp angles chamfered then, along with all flat screw heads, polished by hand.
Publicada por Fernando Correia de Oliveira à(s) 12:37