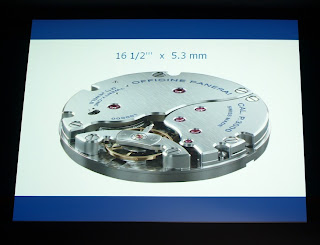 Estação Cronográfica está em Florença, para a inauguração da exposição "Tempo e Espaço: um tributo a Galileo Galilei", patrocinada pela manufactura relojoeira Officine Panerai.
Ao mesmo tempo, a Panerai apresenta um novo calibre, o P.3000, de carga manual e autonomia para três dias.
As características do novo P.3000:
Entirely designed, developed and produced in the Officine Panerai Manufacture in Neuchâtel, the hand-wound P.3000 calibre presents the main characteristics of the Panerai movements both in terms of structure and in terms of performance, robustness, accuracy and its long power reserve.
The thickness of the calibre P.3000 is 5.3 mm and the diameter is 16½ lignes, a substantial size which traces its origins from that of the movements which were fitted to the historic Panerai models. The calibre is immediately recognisable by its construction, which is similar to that of a three-quarter plate movement: a large bridge, next to another smaller one, covers the majority of the mechanical parts and it is fixed to the bottom plate by a series of screws of substantial thickness, thus forming a particularly rigid structure.
The movement has 21 jewels and it uses two spring barrels connected in series. Such an arrangement enables long, thin springs to be used, which ensures the delivery of a more even force and also does so over a longer period of time, with a power reserve of 3 days. The balance wheel is unusually large (13.2 mm) and it is the variable inertia type, with four adjusting screws arranged externally round the ring, so that the rate can be regulated without it being necessary to remove the whole assembly. Supported by a bridge with twin supports – a fixing much safer and more stable compared to the cantilevered single bridge – the balance wheel oscillates at a frequency of 3 Hz, equivalent to 21,600 alternations per hour. It is fitted with an Incabloc® anti-shock device and is free-sprung, so there is no regulating lever.
With brush-finished bridges and chamfered angles – that is, with the angles smoothed and polished – the P.3000 calibre is also fitted with the device for the rapid adjustment of the time: a star wheel with 12 points and a small spring clutch enable the hour hand to be moved one hour at a time, without interfering with the movement of the minute hand or the operation of the watch. 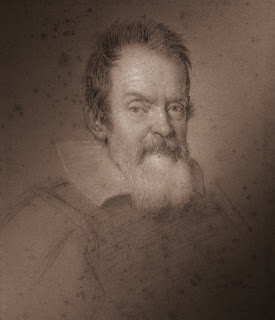 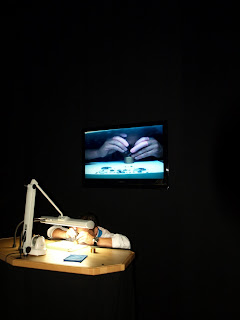 O evento em Florença serviu ainda para apresentar de novo algumas das novidades saídas aquando do Salão de Alta Relojoaria de Genebra, ocorrido em Janeiro. Uma delas é uma homenagem a Galileu, o Luminor 1950 Equation of Time Tourbillon Titanio – 50mm L’Astronomo.
As características deste relógio:
Dedicated to fans of technical grand complications, the Luminor 1950 Equation of Time Tourbillon Titanio – 50 mm L’Astronomo by Officine Panerai is a tribute to the genius of Galileo Galilei, a combination of some of the rarest, most exclusive and fascinating specialities in watch-making. L’Astronomo is the most technically sophisticated wristwatch ever produced by Officine Panerai: a tourbillon with equation of time, indication of sunrise and sunset times for the city chosen by the purchaser and depiction of the night sky of the same city on the back plate. 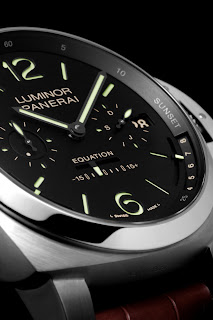 The watch functions are immediate and clear on the dial: a date window at 3 o’clock, alongside a tiny dial that shows the month with a hand; sunset time; equation of time; sunrise time and finally small seconds at 9 o’clock, where the rotation of the tourbillon with a tiny ecru disc is visible through a small dial. Times for sunrise and sunset are shown by two cursors that run along numbered circular sectors and vary depending not only on the seasons but also on the latitude chosen by the purchaser. The dial has the classic Panerai sandwich structure, guaranteeing exceptional night-time visibility thanks to the luminescent substance inserted between the two layers. 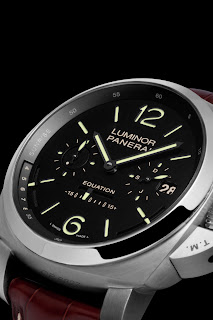 Equation of time is the difference between the time shown by the watch, which is that universally adopted for ease and real or solar time, which varies every day due to the eccentricity of the Earth’s orbit and the inclination of its axis. 4 days a year, these two times coincide perfectly but on all the other days they actually differ by up to 15 minutes, either faster or slower. The linear cursor at 6 o’clock immediately shows this time difference and this calculation is a speciality of top-end watch-making and a feature that very few watches have. 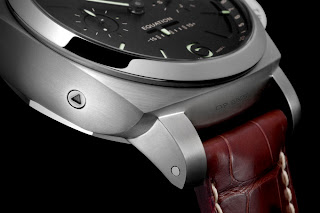 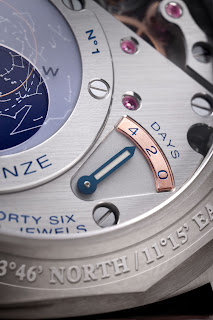 Other indications can be seen through the sapphire glass on the lower part of the movement P.2005/G, based on the Officine Panerai P.2005 in-house calibre, modified to include new functions. With 375 components, the P.2005/G calibre features a typical Panerai tourbillon regulator, which can be admired from the back, turning on an axis perpendicular to the axis of the balance and making two rotations a minute, instead of one. With three spring barrels, it has a manual-wound movement and ensures 4 days’ autonomy, with the remaining power reserve shown by a hand, this too visible on the back.
The last hugely fascinating element that completes the personality and refinement of this model, is the map of the sky on the lower part of the mechanism. The disc that shows the map rotates in one direction or the other, depending on the hemisphere chosen, thus constantly updating the night sky above the city chosen by the purchaser. The name of the city is also engraved on the back, together with the millesimation. 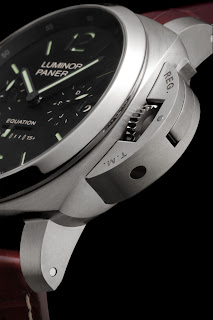 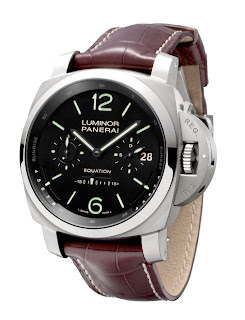 The watch’s Luminor 1950 case is 50 mm in diameter, in titanium so that it weighs less, but clients can also choose a pink or white gold case. Waterproof to 10 bar (about 100 metres), the case has the typical crown-protecting bridge, brushed titanium like the case body, while the anti-reflective sapphire crystal is held in place by a bezel with contrasting polished finish. L’Astronomo comes with an alligator strap and the classic buckle customised with the Officine Panerai logo.
Publicada por Fernando Correia de Oliveira à(s) 16:06