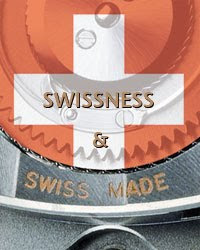 We have already had occasion to state our views in no uncertain terms: in a watch industry context, the credibility of Swiss made among consumers the world over calls for a drastic buttressing of the label’s definition. Current legislation actually encourages fraud and leads to an insidious dilution of the indication which is damaging for the image of genuine Swiss products. An indication of origin must be used in accordance with how it is perceived by interested parties, namely companies within the industry and consumers. Now the very great majority of Swiss watchmaking firms condemn the weakness of Swiss made in its present guise. Consumers meanwhile feel that they are misled – as proven by recent studies – when they learn that certain watches bearing the Swiss made mark have relatively little of Swiss value in their composition.

The Swissness project introduces new conditions to ensure that every industrial product manufactured in Switzerland can legitimately call itself Swiss made: at least 60% of the cost price (including research and development costs) must be realised in Switzerland and the activity that gave the product its essential characteristics must be carried out in Switzerland. There are also plans for every economic sector to specify and supplement these criteria in a sector-wide ordinance. In fact, the FH has already submitted a project of this nature to the Federal Council, following its 2007 general meeting where it was approved by a very large majority. The latter is of the opinion however that formally, Swissness should be carried through to its conclusion before finalization of the FH project.
A number of firms fear that a stronger Swiss made could bring about job losses, insofar as some watches will no longer have access to this designation. What is certain, in contrast, is the relocation of production facilities once Swiss made has lost all value in the eyes of consumers. Moreover, some firms intend to repatriate part of their production or procurement to Switzerland in order to benefit from a strong Swiss made. In addition, contrary to current legislation, Swissness will encourage research and development activity in Switzerland by allowing these costs to be included in the calculation of Swiss value. All of these outcomes will be favourable to employment in Switzerland.

Swissness also introduces new instruments allowing more effective protection of Swiss made abroad. Indeed it will be possible to enter this label in the public register of geographical indications. Such registration will provide official recognition, making it easier to import products into countries where this type of instrument is used (India and Mexico in particular). Swissness will also authorise registration in Switzerland of the Swiss made mark with a view to benefiting from the international registration system. Swiss made will therefore be easier to register as a Certification Mark, the only plausible means of ensuring effective protection in Anglo-Saxon countries. Lastly, Swissness will authorise the more widespread use of Swiss coats of arms on Swiss products.

While it is difficult terrain to negotiate, we are convinced of the need for lobbying on the part of firms. This fully justifies the support given by the FH to the Swissness project, which will shortly be debated in Parliament.
Publicada por Estação Cronográfica à(s) 17:44