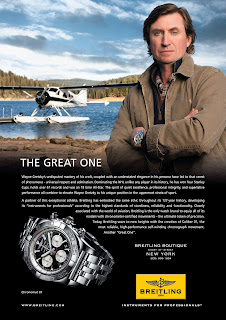 The greatest ice hockey player of all time is the new ambassador of the specialist of "instruments for professionals", in a stellar encounter between two devotees of excellence.

Canadian-born Wayne Gretzky is a living legend in the world of ice hockey. Nicknamed "the great one", this champion renowned for his professionalism and his fair-play has a record-breaking list of achievements to his credit, including four Stanley Cup Championships, 61 NHL records, and being named 18 times to the All-Star teams. In tribute to his absolute superiority, his famous jersey number, 99, has been retired by all NHL teams.

Within the field of ultra-sturdy and accurate timepieces, Breitling has constantly pushed the boundaries of existing accomplishments. A specialist in technical watches, the brand played a crucial role in the development of the modern chronograph, notably by inventing the first independent pushpiece (1915), the second independent pushpiece (1934) and the first selfwinding chronograph (1969). Its obsession with quality has made it the privileged partner of world aviation. As the only major watch brand to equip all its models with movements chronometer-certified by the COSC, Breitling has also created Caliber 01, the world’s most reliable high-performance selfwinding chronograph movement.

Wayne Gretzky is to star in an advertising campaign intended for North America, along with a plane that has also made its mark on history: the de Havilland Canada DHC-2 Beaver, a classic monoplane manufactured between 1948 and 1967, and which is widely regarded as one of the best utility planes of all time. The champion appears wearing Breitling’s flagship model, the Chronomat 01 featuring an ultrasturdy case water-resistant to 500 meters (1,660 ft), an exclusive, powerful design, and powered by the high-performance Caliber 01… Another "Great One".
Publicada por Fernando Correia de Oliveira à(s) 18:02