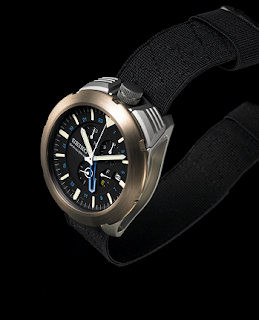 O comunicado da marca:
This accolade is the most prestigious yet awarded to SEIKO’s unique and world-leading Spring Drive technology and SEIKO is greatly honored to be the recipient of the award.
In accepting the award on behalf of Mr. Shinji Hattori, the President & CEO of SEIKO WATCH CORPORATION, Shu Yoshino, SEIKO’s General Manager of the Public Relations & Advertising Dept described the watch:
“This is the only watch in the world designed from scratch to be worn during a spacewalk. It is a watch that brings mankind a step closer to the stars as its hands glide across the dial, plotting time with no ‘tick’, in perfect harmony with the eternal motion of the planets. I thank you sincerely for this award which will be the pride of the entire SEIKO family".
Along with the winners in all the other categories, the SEIKO Spring Drive Spacewalk watch will be displayed to the public at the Salon Belles Montres from November 26 to 28 in Paris.
This is the second occasion on which SEIKO has had the honor to win the Grand Prix d’Horlogerie de Genève. In 2006, SEIKO’s first generation of E-Ink watch won the prize as the Electronic Watch of the Year.
Publicada por Fernando Correia de Oliveira à(s) 07:53