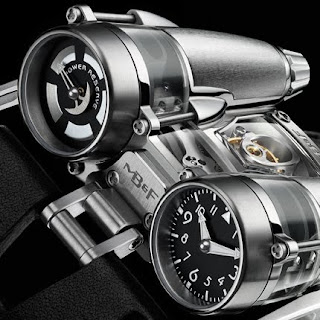 Como Estação Cronográfica oportunamente referiu, o Horological Machine nº 4 - HM4 Thunderbolt da MB&F obteve o galardão de Relógio do Ano na categoria Conceito e Design do Grande Prémio de Relojoaria de Genebra.
Hoje, Maximilian Büsser, dono e CEO da MB&F (Maximiliam Büsser and Friends), vem congratular-se com o prémio. Parabéns, Max!
On behalf of all of the team at MB&F and on behalf all of the Friends involved in creating HM4 Thunderbolt, I am extremely pleased (and no small amount proud) to announce that HM4 Thunderbolt was awarded the prize for best Concept and Design Watch by the prestigious Grand Prix d’Horlogerie of Geneva 2010!
HM4 Thunderbolt is a miraculous machine. It was a miracle that we found the nerve to even consider such an ambitious project, and it was yet another miracle that we actually managed to bring HM4 to life!
Three years of development; 311 components just for the movement; and the most complicated case in the history of watchmaking - creating the sapphire central bloc alone requires approximately 150 hours to machine. All that work to be able to craft just two pieces per month.
In my (nearly) twenty-year career in horology, Horological Machine N°4 is the timepiece that I am the most proud of. It is truly a pleasure to have the risks and the work involved in creating it so openly recognized by our peers. 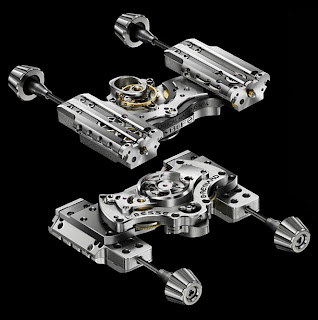