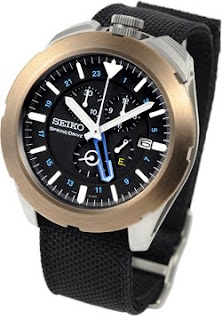 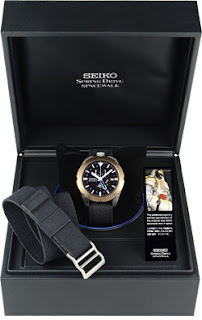 A marca emitiu hoje um comunicado sobre a distinção, a primeira que a Seiko obtém no mais prestigiado prémio internacional de relojoaria:
On November 18, at the Grand Prix d'Horlogerie de Genève 2010, the SEIKO Spring Drive Spacewalk Commemorative Edition was named the Sports Watch of the Year. This accolade is the most prestigious yet awarded to SEIKO’s unique and world-leading Spring Drive technology and SEIKO is greatly honored to be the recipient of the “Grand Prix”.
The awards, now in their 10th year, are globally agreed to be the Oscars of the industry are widely acknowledged as the most prestigious awards in the watch world. The awards are made by a distinguished panel of expert judges who select from literally hundreds of watches submitted each year. The awards are particularly important as they are awarded only to those pieces that demonstrate the very highest level of watchmaking skill. More than any other, these awards are made by watchmaking experts to watchmaking experts.
In accepting the award on behalf of the President & CEO of SEIKO WATCH CORPORATION, Mr. Shinji Hattori, Shu Yoshino, General Manager of the Public Relations & Advertising Dept. described the watch:
“This is the only watch in the world designed from scratch to be worn during a Space Walk. It is a watch that brings mankind a step closer to the stars as its hands glide across the dial, plotting time with no ‘tick’, in perfect harmony with the eternal motion of the planets. I thank you sincerely for this award which will be the pride of the entire Seiko family.”

Along with the winners in all the other categories, the SEIKO Spring Drive Spacewalk watch will be displayed to the public at the Salon Belles Montres from November 26 to 28 in Paris.

This is the second occasion on which SEIKO has had the honor to win the Grand Prix d’Horlogerie. In 2006, SEIKO’s first generation of E-Ink watch won the prize as the Electronic watch of the year.
From Space to Earth. The SEIKO Spring Drive Spacewalk is now available worldwide.

The SEIKO Spring Drive Spacewalk is the first watch ever designed specifically for use in outer space. Now a commemorative edition is available through selected SEIKO retail outlets across the world.

First presented at Baselworld 2008, this remarkable watch was first used in October 2008 when the private space adventurer, Richard Garriott, took it into space on his mission to the International Space Station (ISS). It had been built expressly for his space flight and was designed to withstand the extreme temperatures, pressures and radiation conditions involved in an Extra-vehicular Activity (EVA), or spacewalk. It performed flawlessly throughout Richard’s 12-day flight in space. Subsequently, in December 2008, two Spring Drive Spacewalk watches were worn by a Russian cosmonaut throughout a 5-hour-38-minute EVA. During the EVA, both the time of day and chronograph functions worked perfectly, even when worn on the outside of the space suit. On their return to Earth, the watches were studied, assessed and tested at Seiko Epson’s facility, and their perfect performance during the EVA was independently verified.

It had always been Richard Garriott’s aim that the watch would help generate awareness of, and interest in, the future potential of space exploration. For this reason, one of the two watches Richard had taken into space was sold at a much-publicized auction in New York in September 2009 for US$45,600, a remarkable premium over the reserve price. SEIKO ‘s proceeds were donated to the two charities that Richard supports: the Nature Conservancy and the Challenger Center for Space Science Education.

Now a commemorative limited edition of this remarkable watch is available to the public. Just 100 pieces are being produced. The first ones were released in February 2010. This new watch has the exact same specifications as the watch which went into space with one adaptation: a screw-in crown is used. To ensure ease of manual winding, the crown on the original was not a screw-in; however, the perfect functioning of the watch, both inside and outside the ISS, revealed that the self-winding mechanism worked flawlessly in space, so a screw-in crown is now used in the commemorative edition to enhance the overall security of the case. The watch has a ballistic nylon strap. An additional elastic nylon strap, which is exactly the same as the one used in space, is included in the special presentation box. The serial number is engraved on the case back.
Publicada por Fernando Correia de Oliveira à(s) 09:50