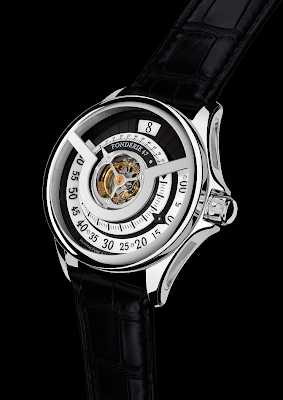 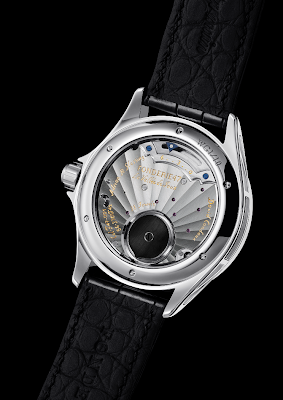 Orbiting on high above the movement, the central 3-minute flying tourbillon dominates the three-dimensional dial and mesmerizes the eye. Three second-hands, equally spaced 120° apart around the tourbillon cage, arc sedately across the seconds-scale above the tourbillon and 'Fonderie 47': 'Sedately' because tourbillon revolves at just 1/3 of the speed of a traditional one-minute tourbillon. While only one second-hand is visible at any time − the other two are hidden under the gold rifle-sight inspired frame set into the sapphire crystal − their positions are revealed by blued screws joining the outer tourbillon cage and inner three-arm hub.

“I feel one of the biggest achievements of this timepiece is the very logical way you read the time.” Adrian Glessing (Inversion Principle designer)

A first, or even a second, glance is unlikely to divulge any obvious similarity between jumping hours, retrograde seconds and an AK47; however, avoiding blatantly obvious connections is the aim. On a more ethereal level however, gun mechanisms snap sharply and precisely into place: As does the instantaneous jumping hour at 12 o'clock as it changes the hour; and the large 240° retrograde seconds hand as it flies back to zero each hour across the bottom of the dial. Each press of the quick-set pusher in the crown advances the jumping hours by one hour. The long 6-day power reserve has both a lateral indication via a sapphire window set into the left side of the case band and a second indication visible through the display back.

The display back reveals the stunning sunray guilloche pattern radiating out from the ratchet wheel, which is capped by a dark plate of transformed steel from a destroyed AK47. The plate is in the form of the Fonderie 47 symbol and rotates as the watch is wound. '56-3701F42', the serial number of the destroyed weapon the metal is from, is elegantly hand engraved beside the plate.

“A mentor taught me what he thought generated the fundamental values of watchmaking: The eye; the hand; and the heart. These are values that guide my work. A timepiece built around these values generates powerful emotions.” David Candaux (Inversion Principle watchmaker)

"Inversion Principle is the result of a group of extremely talented people willing to do things others deemed impossible, risking something of themselves in the undertaking." 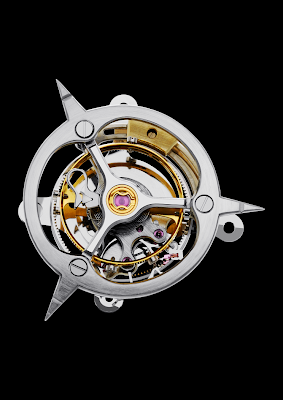 When Fonderie 47 founder Peter Thum first approached watchmaker/movement designer David Candaux, it was with a very ambitious request many said was impossible: Create a completely original and distinctive complicated high-end watch using the best of traditional Swiss watchmaking techniques… and it should incorporate aspects of the AK47 rifle, but without obviously looking like an AK47 style watch.

With a three-minute central flying tourbillon, instantaneous jumping hours and retrograde minutes that snap into place in sharp, precise actions similar to gun mechanisms, and a lateral power reserve indication providing a discreet visual link to the ejection port of an AK47, Candaux delivered all that and more.
"Fonderie 47 has allowed us to create a unique timepiece, not simply for the purpose of creating a luxury watch, but for a noble purpose." David Candaux (watchmaker)

Seen through a display back, the back of the movement features a stunning sunray guilloche pattern radiating out from the dark plate of transformed steel from a destroyed AK47 that covers the ratchet wheel. This plate turns when the watch is wound. An opening to the right of the plate offers access to adjust the power reserve mechanism, while a second small opening near the crown reveals part of the winding mechanism. The second power reserve indicator arcs across the top of the back plate.

Inversion Principle's three-dimensional indications, rise from the 240° numbers on the flat retrograde minutes ring to the inner inclined minute markers. The blued minute hand has an inclined inner arrow following the angle of the minute marker track.

The three-handed seconds indicator on the tourbillon cage has a retrograde effect complimenting the minutes: The hands disappear after 60 on the right and appear to reappear at 0 on the left.
On either side of the jumping hour window, past and future hours can just be discerned through the translucent crystal ring that circumscribes the dial.

Ensuring that the complex indications were both easy and logical to read, and that the case and dial blended harmoniously was the role of Geneva-based watch designer, Adrian Glessing.

"We strived to represent the most classical; the most beautiful; and the most technical aspects of what the Swiss industry had to offer, and put it all into one watch." Adrian Glessing (designer)

Myriad details, from the obvious like the gun-sight inspired bezel cross piece delineating the minutes from the central tourbillon to the subtle, like the tapering indents set into the flowing lugs, which visually minimize the height of the case height and the curve of the tourbillon cage following the curve of the sapphire crystal, all contribute to convey luxury and quality. 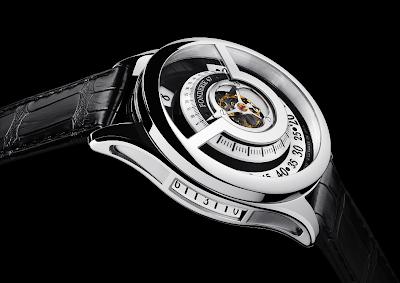 Fonderie 47 − 'fonderie' is French for foundry (for melting and casting metal),'47' for AK47 − was founded in 2009 by Peter Thum with the goal of reducing the number of destabilizing assault weapons in Africa. Thum realized the enormous problem these weapons created, having met boys and young men armed with assault rifles, and the victims of these weapons, while developing clean water projects in east Africa.

There are millions of assault weapons in Africa. A large majority of these are AK47 variants. In Africa, assault rifles cost about 70% less than anywhere else in the world. While prices of AK47s have generally risen worldwide over the last three decades, they have fallen in Africa due to the sheer number of weapons and ease of availability. Thum decided to transform these implements of devastation into something as removed from them and as positive as possible, i.e. exclusive objects that would inspire change and fund the destruction of weapons.

The mission to create a high-end mechanical watch incorporating metal from a destroyed AK47 began even before Fonderie 47 was founded, because it quickly became clear that the development and production of a completely original complicated haute horlogerie timepiece would take many years.

Fonderie 47 has also worked with some of the world’s best designers and jewelers to create artistic pieces made from AK47 steel, precious metals and jewels.

Working with the Nobel Prize winning NGO Mines Advisory Group, to date Fonderie 47 has funded the destruction of over 30,000 assault rifles in war zones in Africa.

Fonderie 47 CEO and founder Peter Thum began his business career with Gallo Winery and McKinsey & Company before becoming a social entrepreneur. Visits to Africa highlighted the widespread health issues caused by the lack of clean water and led Thum to launch the bottled water brand 'Ethos Water' in 2003 to fund safe-water projects in Africa. Starbucks bought Ethos Water in 2005 and after the sale, Thum served as Vice President of Starbucks Corporation, operating the Ethos Water business, and as a Director of the Starbucks Foundation. Ethos Water has helped around half a million people around the world to gain access to safe water, sanitation and hygiene education. While visiting safe water projects in Africa, Thum became aware of the problems caused by widespread availability of assault rifles, in particular the ubiquitous AK47. He decided to launch a luxury brand − something sending a positive message and far removed from the destructive arms − the profits from which would be used to destroy and eliminate these weapons. In 2009 Fonderie 47 was launched, a venture that transforms AK47s from Africa into rare jewelry and exclusive high-end Swiss timepieces, which in turn fund the destruction of more weapons − over 30,000 destroyed to date.

Peter Thum also founded and is President of the non-profit Giving Water, which has helped over 6,000 schoolchildren in Africa to gain water and sanitation access and is Board Director of The Fund for Global Human Rights and an adviser to FEED Projects.
Publicada por Fernando Correia de Oliveira à(s) 12:41