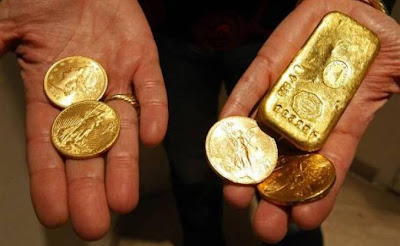 Gold will rally this year and into 2014 as U.S. Federal Reserve policy makers will probably maintain asset purchases for two more years to buttress the recovery of the largest economy, according to Morgan Stanley.

The metal, which rose for a 12th year in 2012, may average $1,830 an ounce in the final quarter from $1,715 in the first, $1,745 in the second and $1,800 in the third, analysts Peter Richardson and Joel Crane said in a report today. Prices will be supported by investment and central-bank buying, they wrote.

Gold had the biggest quarterly drop since 2008 in the final three months of last year as data showed the U.S. recovery gaining traction, boosting concern that the Fed may withdraw stimulus. Minutes from the Federal Open Market Committee’s December meeting released on Jan. 3 showed members debated an end to asset purchases this year. Each month the Fed has targeted buying $85 billion of Treasuries and mortgage debt. “We are skeptical that dissenters within the FOMC on current monetary policy will succeed in overturning the current policy settings before the end of 2014,” the analysts wrote, citing elevated unemployment and so-called tail risks to growth. There would be an “ongoing commitment to QE3,” they said, using initials for the third round of quantitative easing.

Morgan Stanley’s view contrasts with Danske Bank A/S and Credit Suisse Group AG, which predict prices will probably peak this year. Gold will average $1,720 in 2013 and $1,600 in 2014, according to Christin Tuxen at Danske Bank. Tom Kendall at Credit Suisse expects $1,740 and $1,720. Allan Hochreiter (Pty) Ltd. Chief Executive Officer Rene Hochreiter said this month that gold’s bull market is over as U.S. growth improves.

The U.S. will grow 2 percent in 2013 and 3 percent next year, the International Monetary Fund said yesterday. Housing starts rose 12.1 percent in December, capping the best year since 2008, data showed this month. Unemployment held at 7.8 percent last month, down from 10 percent in October 2009 during the financial crisis that spurred the Fed to cut interest rates to a record low and adopt the unprecedented stimulus program.

Investment Buying “We expect that very low nominal interest rates, an ongoing commitment to QE3 and a below-par recovery with attendant pressure on the dollar will still combine to encourage investment buying of gold,” Morgan Stanley said in the report. Gold usually trades counter to the U.S. currency.

Increased central-bank purchases of gold as a reserve portfolio asset will support the rally, Morgan Stanley said. Central banks added the most gold in 48 years in 2012, according to data from Thomson Reuters GFMS.

Gold may climb over the next three months as U.S. lawmakers attempt to tackle the country’s debt ceiling as the economy slows, Goldman Sachs Group Inc. said on Jan. 18, advising investors to place bets on advances. The bank reiterated a three-month target of $1,825 an ounce, while forecasting weaker prices in the second half as the U.S. economy rebounds.

While restating its bullish gold stance, Morgan Stanley’s quarterly forecasts for this year were pared between 2 percent and 6 percent, according to the report. Prices will also be supported as miners struggle to raise output, Morgan Stanley said. The bank’s 2014 forecast was raised 2 percent to $1,845.

Fed officials are considering how long to keep buying mortgage bonds and Treasuries. The minutes from the Dec. 11-12 FOMC meeting showed “several” members said it would “probably be appropriate to slow or stop buying well before the end of 2013,” a “few” were willing to let the program run to the year-end, while “a few others” didn’t give a time frame.

The FOMC’s participants next gather on Jan. 29-30 to review policy. The Fed’s latest Beige Book report, released Jan. 16 and which provides an anecdotal account of the U.S. economy for discussion at the meeting, said while economic activity has picked up, labormarket conditions remain mostly unchanged.
Publicada por Fernando Correia de Oliveira à(s) 18:38