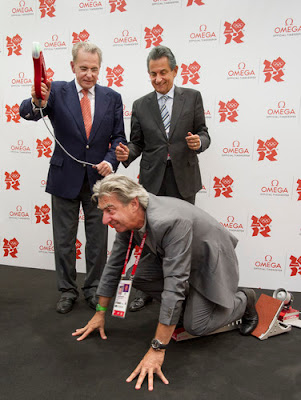 The press conference began as OMEGA’s “Start Me Up” commercial played on two large TV screens and the speakers entered to the soundtrack provided by the Rolling Stones.

Dr. Jacques Rogge, President of the International Olympic Committee, Nick Hayek, the CEO of the Swatch Group, Stephen Urquhart, the President of OMEGA and Peter Hürzeler, OMEGA Timing Board member addressed members of the international media and expressed their enthusiasm about the Games that will begin on Friday with a lavish Opening Ceremony.

Dr. Rogge praised the creativity and preparation of the London Organising Committee and said that he was looking forward to an outstanding edition in 2012. He said that the world was being exposed to the British way of constructing sport and that the country’s unparalleled history of sporting competition. Asked about preparations for the Games, he said that it was a question that could only be comprehensively answered when the Games are over.

Nick Hayek said that OMEGA’s long history of Olympic Games timekeeping was a source of pride and said that any company would envy the brand’s opportunity to work with the IOC and local organisations. He said, “It’s a long tradition that has touched billions of people all over the world. For eighty years, it’s been part of our legacy. It really is a relationship of trust and long-term commitment.”

Stephen Urquhart reminded the guests that when OMEGA first served as Official Timekeeper, all of the events at the Los Angeles 1932 Olympic Games were timed by thirty chronograph stopwatches, comparing it with some 400 tons of equipment used today by the company’s 450 timekeepers.

Peter Hürzeler talked about the evolution of sport timekeeping technology and compared the first starting blocks introduced by OMEGA at the London 1948 Olympic Games with their successors that are being introduced this year. The old ones, he pointed out, were mechanical while the modern equivalents are completely electronic, offering even better starting conditions for the athletes who use them.
Publicada por Fernando Correia de Oliveira à(s) 23:46