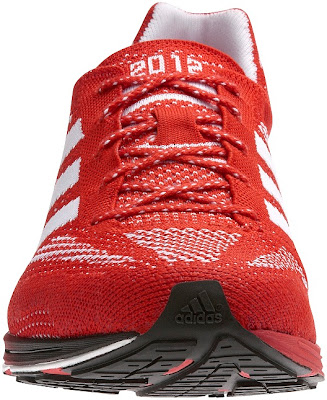 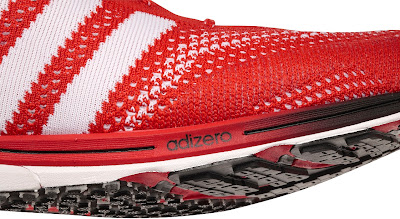 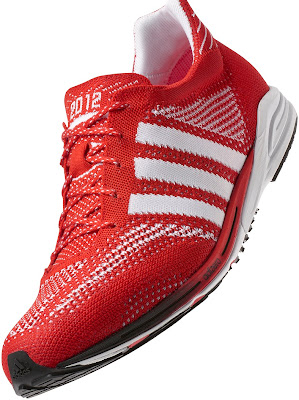 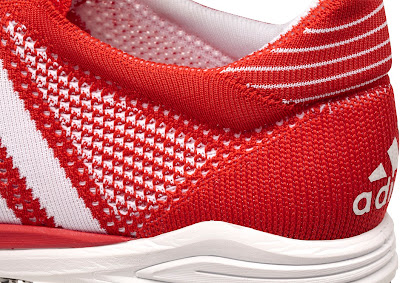 What is the adiZero Primeknit?
The adiZero Primeknit is a first-of-its-kind shoe using the latest design tools and adidas’ new seamless engineering technology – a breakthrough method that knits the entire upper in just one thread.

Explain the technology behind the shoe?
adiZero Primeknit employs just one thread knitting the entire upper – wrapping the shoe around the foot. Engineered stiffness controls stretch and support, while knitted grid patterns in distinct zones provide ventilation. The shoe has no lining or reinforcements – the strength comes from the fused yarn. While traditional shoes are constructed from several pieces, the adiZero Primeknit reduces the amount of materials needed by eliminating waste from leftover trimmings.

How does it work?
Instead of traditional upper construction, where approximately 15 different pieces are cut out of a sheet of material and then sewn together, seamless engineering knits together an entire upper from fused yarn. When heated, this thermoplastic yarn molds together, hardening as they cool to provide the support needed in the heel and the front foot, effectively turning the sock into a shoe. A polymer application technique (patent pending) was also developed to be able to precisely control the stretch of the knit, resulting in a fine-tuned fit.

What are the main advantages of this technology?

Who designed the Primeknit?
The adiZero Primeknit was designed by the adidas Performance Sport design team, based in Herzogenaurach.

Why was it invented and what was the inspiration behind it?
Four years ago, adidas’ design team decided to collaborate with 4 industrial designers in order to take on a new challenge: finding a completely new way to construct footwear that provides superior performance for athletes.
The team found a breakthrough solution from an unexpected source of inspiration: the furniture industry. The adidas team and industrial designer Alex Taylor together discovered that, infusing new types of technological approaches commonly used for designing furniture, they could completely rethink how footwear is made.

How and why did the project come about?
The project came about following the design team’s team visit to a local market where they stumbled across an intriguing glove – one side stiff, the other flimsy. The challenge for the designers though was to find a material that would allow for this; knitting with fused yarn was the ideal choice. By using this material, the shoe is far more sustainable than any other shoe whilst being just as functional and comfortable.

How long did it take to develop?
4 years.

Why is it called primeknit?
The idea behind the name is in sync with the name of the sprint spike also called adizero Prime. Prime, as a name, refers to something that is reduced down to a degree that can no longer be reduced or divided (similar to the goal of adizero, where the ultimate weight would be zero grams). Prime numbers for example, are numbers that cannot be divided by another number – they are pure and unique in that sense. The ultimate prime number is 1. That is our goal with prime knit. To reduce the process of shoemaking down to one single step that marries the highest standards in performance and innovation with the ultimate responsibility to simplify production and reduce waste.

You say “digitally knitted”…
This refers to the knitting process programed via computer.

Why is it different/better than the normal way of making uppers?
The first and perhaps the most exciting advantages of seamless engineering are the resulting light weight and comfort. As the upper is one single piece, with no seams the shoe wraps itself snugly around the foot providing better fit, like wearing a sock. Secondly, this new technology allows the designers to control which parts of the upper should be supportive and which should be more flexible at level of precision that has not been possible before, resulting in a fine-tune fit. As well, there is an efficiency advantage of creating one single piece upper instead of constructing an upper from multiple pieces. There’s a minimal amount of excess materials left over in comparison. Is it just technology for technology’s sake or is there a clear performance benefit to it?
There is a clear performance benefit: A lightweight and superior fit, with less waste. Looking ahead, this technology opens up a host of possibilities to enhance performance beyond what is possible with conventional shoe construction. Stay tuned to adidas for more soon!

They are super lightweight, but does this mean you have taken cushioning/ support out?
No. The shoe is designed for race running, and the cushioning is optimized for that purpose.

Can I run in it?
Absolutely. The shoe is design for long-distance racing in particular.

Do they have performance tracking software integrated?
At the moment no.

I over pronate when I run, would prime knits be suitable?
For race-day, absolutely.

I have heard lightweight trainers can hurt when you first run in them. Would I need to alter my training when I first wear primeknit?
The shoe is designed with racing day in mind.

Why is it different/better than Nike flyknit?
It’s one-piece. And it has better comfort and support. Instead of a sock that has extra materials added to it to provide support, the adizero primeknit is constructed from a one-piece upper with support and flexibility already built inside it.

What is the future of primeknit? Is there a general release of this shoe? Is it going to grow as a range?
There are endless possibilities for the primeknit shoe and we’re already working on what the next shape and form will be. Stay tuned for more.

Can you talk a bit about what is happening over the Olympics?
To celebrate the launch of this ground-breaking new shoe, we are launching 2012 limited and number adizero primeknit running shoes. These will be available only through our N.10 store in London during the period of the Olympics.

Is there a waiting list?
There is no waiting list, but they will go fast so you better come and get a pair while you still can!

How much does it cost?
212GBP
Publicada por Fernando Correia de Oliveira à(s) 14:52