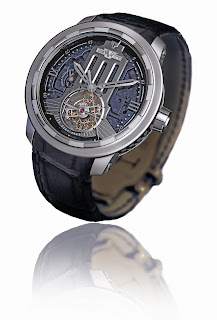 DeWitt’s Twenty-8-Eight Regulator A.S.W. Horizons, by its design and inspiration, also intends to pay tribute to Art Déco design, and in particular to the post Great Depression trends explored in America. In this context, many American industrial designers were fascinated by streamline aesthetics and designed a wide range of innovative and modern products such as cars, ships, factories and even revolving restaurants. One very influential designer, Norman Bel Geddes had a totally new perception of design and for him, innovation simply illustrated courage:

"We are too much inclined to believe, because things have long been done a certain way, that that is the best way to do them. Following old grooves of thought is one method of playing safe. But it deprives one of initiative and takes too long. It sacrifices the value of the element of surprise. At times, the only thing to do is to cut loose and do the unexpected! It takes more even than imagination to be progressive. It takes vision and courage."

Such an approach is many ways similar to the philosophy Mr de Witt has towards watchmaking. In 1932, Bel Geddes published a book that was to become a reference for generations of creative minds where he outlined his unique vision and understanding of what design ought to be. Amusingly, his book is entitled Horizons, which is the setting in which the Twenty-8-Eight Regulator A.S.W Horizons found its inspiration.

The scene for this new DeWitt creation is therefore the majestic New York, in its inspired and thriving 1930’s. A new and modern city, where cultures meet and different times cross paths. Where stone and iron are put together. Where modern bridges echo the cathedrals of the old world. An audacious city, where dreams can be made reality and architectural masterpieces flourish freely.

The new Twenty-8-Eight Regulator A.S.W. Horizons is home to the already famous calibre DW 8014, that made sensation when first revealed at Baselworld 2010. This new automatic Tourbillon is the first complicated regulator movement integrating a Tourbillon entirely developed and produced by the DeWitt Manufacture. Most importantly, it introduces a patented and extremely ingenious Automatic Sequential Winding (A.S.W) device, driven by a peripheral oscillating rotor.

The peripheral oscillating rotor is attached to a ring with a sinusoidal profile on its inner edge. This particular shape will, in turn, activate the patented A.S.W system which enables the movement to always operate in an ideal functioning range, between 92 and 96% of the main-spring torque. The main gear-train is therefore guaranteed to always receive a constant and stable flow of energy thanks to the sequenced winding of the barrel.

Indeed, two little arms, rocking up and down the sinusoidal profile, ensure the winding of the barrel until it reaches 96% of the movement’s full winding. At that moment, a lever disengages the pawl from winding the barrel and forces it to continue its movement in the air, without hooking on to the wheel. The movement then runs on its reserves of energy, until it reaches 92%, and the pawl hooks back on. Such a technical prowess enables to obtain an ideal functioning range with the usage of a single, manual-type barrel. Moreover, it avoids all the running defects observed when slip-springs are used on conventional automatic calibres.

Built out of some 320 components, the calibre DW 8014 is the perfect illustration of the inventive audacity of DeWitt’s master watchmakers. It combines the horological classicism embodied in the DW 8028 Tourbillon with the extraordinary technological innovation of the A.S.W. device. Moreover, the heart of the balance beats to the rhythm of a Straumann Hairspring® with Phillips curve. It is made out of an unbreakable, self-compensating, non-oxidizing and anti-magnetic alloy. The perfect homogeneity and incredibly precise flat rolling of the Hairspring (0,0001 mm) guarantee an extremely high precision to the mechanism.

The Twenty-8-Eight Regulator A.S.W. Horizons is a wonderful tribute to a city with multiple faces and multiple layers. The dial is dominated by an impressive New York Art Déco construction made of four columns that majestically look down on the Tourbillon mechanism. Moving downwards, this pavilion-shaped building widens up to embrace the Tourbillon cage and form solid foundations that reach out on either sides. A perfectly balanced structure adorned with a sunray pattern reminding of a soft evening light.

The rest of the dial is a subtle game of layers and transparency effects. Made out of tinted sapphire with bluish tonalities, the crystal beautifully reflects the warm, titanium-tantalum ambiance coming out of the central building and of the watchcase. It also enables to get a glimpse at the interior mysteries of the watch.

The hours and minutes hands, positioned in the centre and in the shape of two-edge swords, are like two additional columns dictating the passage of time. In direct contact with the Tourbillon cage, the ticking dead-beat seconds hand marks a pause for each second counted, which beautifully outlines the precision level achieved by the oscillating balance. The power reserve is of 72 hours and is indicated at 9 o’clock by a hand that covers a 180 degree segment.

The 46 mm round case is made of titanium-tantalum and presents particularly comfortable proportions. It is slightly thinner than the famous Academia collection and features 48 imperial columns on its flanks. The bezel is particularly interesting as its polished and satin-finished columns provide eye-catching reflections. The lugs were also redesigned and slightly curved to preserve harmonious lines.

The sapphire crystal back offers a spectacle which is worth the detour: the bi-directional winding dance of a streamlined peripheral rotor, leaving a clear, unobstructed view of beautiful Art Déco bridges. You will also observe the dead-beat seconds lever, powered by the Tourbillon cage and driven by a small pinion, sliding up each tooth of the seconds’ wheel and hooking on to the next one, at one second intervals.