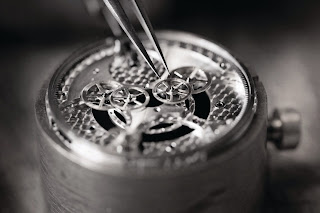 Swatch Group's plan to stop supplying rivals with key components threatens the "Swiss made" seal on which the industry rests and could force watchmakers to source from Asia or simply go out of business.

Industry experts believe Switzerland's watch brands have become too dependent on Swatch Group and have not invested enough in engineering, preferring instead to splash out on fancy marketing campaigns featuring famous sports stars and actors.

"It is clear that a tightening of the supply market coupled with the need to redefine the business model could turn a few brands to quick and cheap sourcing alternatives in East Asia," said Pierre Landolt, Chairman of the Sandoz Family Foundation, which is behind high-end watchbrand Parmigiani Fleurier.

"Watchmaking is one of the few global markets where Switzerland enjoys a position of leader. And the label 'Swiss made' is an essential reason for this," he said.

Swatch Group said in December that it wanted to stop supplying the rest of the watch industry with important parts, broadening a move taken a few years ago to cut deliveries of watchmaking kits, also known as ebauches, from 2011 onwards.

Chief Executive Nick Hayek accuses some watchmakers, without naming them, of being hollow brands that invest little in the craft and spend millions on glamorous ad campaigns.

"We want to stop this supermarket attitude," Hayek told Reuters in a recent interview. "Some players have preferred to just invest in marketing and not in the most important thing, which is the content of the watch."

Some experts say the threat from Swatch group, which owns brands such as Omega, Breguet and Blancpain, is aimed in part at large rivals like Tag Heuer, one of the industry's biggest ad spenders whose campaigns have featured sports stars such Maria Sharapova and actors such as Leonardo DiCaprio.

NO LONGER SWISS MADE?
Tag Heuer recently had to admit that it had bought the intellectual property for its first in-house movement from Seiko Instruments Incorporated. But it stressed the movement had been re-enginered by its staff and produced in Switzerland.

Watch movements consist of a few key parts including the winding and setting mechanism and the mainspring.

To get the "Swiss made" label, the assembly work on the movement and on the watch itself has to be carried out in Switzerland, with at least 50 percent of the components of the movement made locally.

Analysts said such a move from Swatch Group would hit its profits and make life difficult for other watchmakers but thought it unlikely the group would go through with its threat.

"I don't really believe that he will go through with this. All companies that do not have their own movement production will have a problem as there are not a lot of players around who can supply watchmakers with movements," said Vontobel analyst Rene Weber.

"For example, Breitling, Tag Heuer and some of Richemont's brands still depend a lot on Swatch Group. If Hayek were really to go through with this, it would have a short-term negative impact on earnings," he said, adding that such a move would need a very long transition period.

Swatch Group's manufacturing unit ETA, formed from a number of independent factories set up at the end of 18th century, is the lifeblood of the whole Swiss watch-making industry. It makes movements fitted in about 80% of Swiss watch brands.

As the biggest supplier in Switzerland, ETA offers the best price-quality ratio. Other Swiss makers of movements exist, such as Sellita, Soprod, Technotime and Vaucher, in which Hermes has a a 25% stake.

But few, if any, can match the volumes and prices of ETA. And those watch brands that already make their own movements are unlikely to want to supply competitors.

"It would be like asking Ferrari to make engines for rival carmakers," said Christian Barbier, head of sales at Parmigiani Fleurier.

"We agree with (Nick) Hayek's strategy. This will shed light on those who have the know-how and those who do not," he said.

Brands that have developed their own movements include independents Patek Philippe, Rolex, Parmigiani, Audemars Piguet and Corum.

There are also Richemont brands Roger Dubuis, Jaeger-LeCoultre and Lange & Sohne and Vacheron Constantin and LVMH brands Zenith and now Hublot, which took on the machines and staff of the high-end movement maker BNB Concept.

INVESTING IN INDEPENDENCE
Philippe Pascal, head of LVMH watches and jewellery, directly addressed Hayek's threat earlier this month at the annual results conference when he said the priority was to increase the vertical integration of Tag Heuer and Hublot.

As a sign of the times, luxury brands will also unveil their first movements in Basel in March, including DeWitt, which sells about 1,500 watches a year starting at 13,000 euros.

"For some brands, the temptation to source oneself in Asia will be great," said Nathalie Veysset, chief executive of DeWitt. "If one gets into that, it puts into question the whole notion of 'Swiss-made' even if one can play on the added values of assembly and parts to get the label."

Some watchmakers said they could already get many dials, movements, hands and other parts from China that could be as much as five times cheaper than in Switzerland or in Japan from big manufacturers such as Seiko.