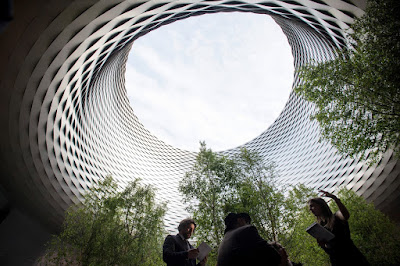 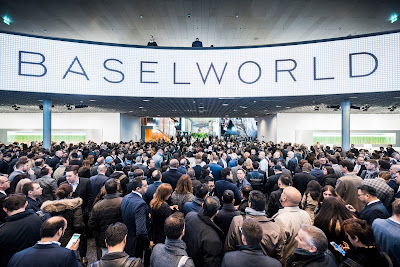 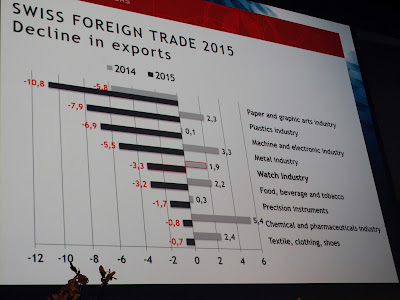 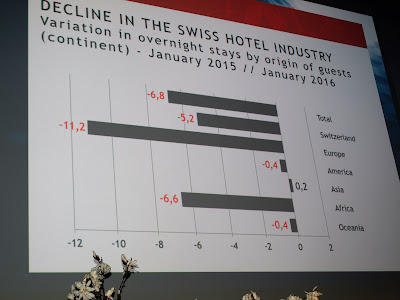 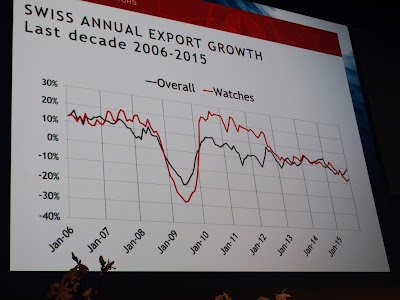 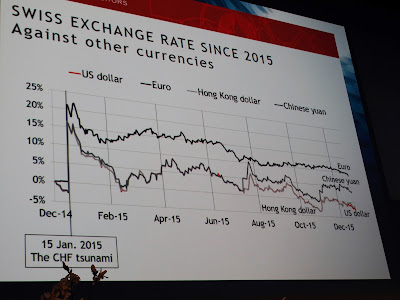 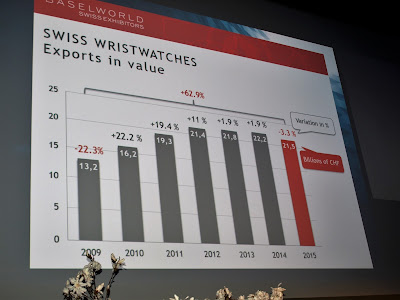 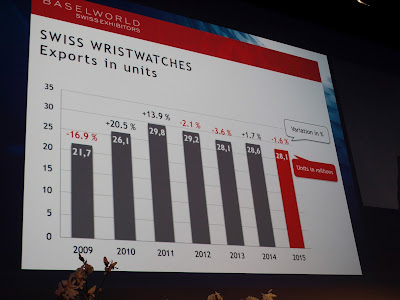 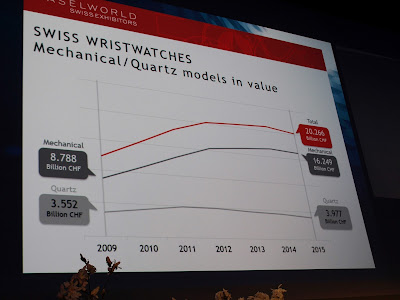 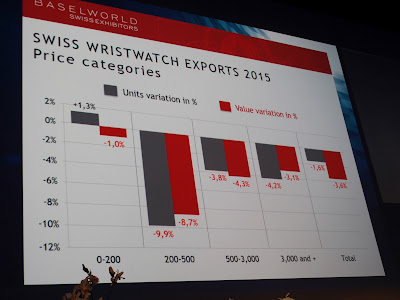 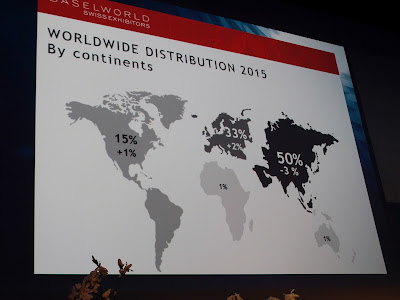 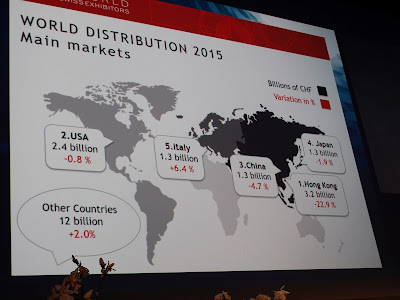 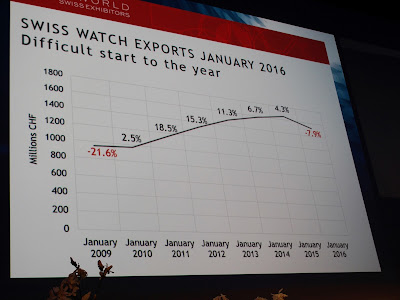 For Swiss brands, Baselworld 2016 remains the place to be

As Baselworld wraps up after eight days of intense activity, the first assessments shared by the Swiss brands indicate that despite the slight downturn (-3.3%) in 2015, Swiss Exhibitors remain confident regarding this year’s results. The second semester should counter-balance a difficult start to the year.
More than 145,000 strode the aisles of the show during this year’s edition, in order to admire creations and innovations by watchmakers, jewellers and representatives of related sectors. The wealth of the Swiss watchmaking heritage on display confirmed Swiss brands’ determination to continue cultivating their skills, convinced that they will endure despite a tough international context. Witness the impressive media coverage of the event and the constantly growing press exposure that makes Baselworld a firm focus of interest within the luxury world.

Determination and confidence are the order of the day

Baselworld is beyond doubt the world’s biggest trade show of its kind, in which all partners from watchmaking, jewellery and related sectors rub shoulders. 1,500 exhibitors from 40 countries congregate there each year. This unique platform is without equal and enables all stakeholders to vie with each other and stimulate their respective creativity. Baselworld is not only the Salon where one measures time, but also the place where time is clothed in materials, technologies and values that reflect its emotional nature.

This 100th edition featured a tougher economic environment than the previous year. In the wake of the November 2015 terrorist attacks, many travellers cancelled their trips to Europe, thereby affecting end-of-year sales which are always very important for the Swiss watch industry. Stocks acquired for the festive period were only partially sold, which explains the tough start to the year. The situation has also been compounded by certain modifications involving visa regulations. All sectors have been affected, including diamonds, precious stones and related sectors. After a steep 7.9% drop in January, the figures for February herald an improvement, with a smaller 3.3% decline. One must hope that this improvement will result in restocking as sales pick up.

More journalists than ever

The media world continued paying close attention to Baselworld, notably via a steadily growing number of on-line TV channels and media. This edition drew a record number of 4,400 media representatives (+2.3%), and only slightly fewer participants than last year (145,000). Retailers and partners were on hand to admire the latest “Swiss made” innovations presented by the 304 Swiss brands taking part in Baselworld.

THE UNIQUE AND LASTING APPEAL OF BASELWORLD

Baselworld 2016, the unique and unmissable trendsetting show for the global watch and jewellery industry came to a positive conclusion today after eight eventful and memorable days. 1,500 of the world's most famous and prestigious brands representing the entire spectrum of watches, jewellery, diamonds, gemstones, pearls as well as machinery and supplies united in Basel with renowned buyers and the global press to take the pulse of the market, celebrate the unveiling of new collections and experience first-hand the launch of trendsetting innovations and creations.

The latest edition of the undisputed trendsetting event for the world's watch and jewellery industry, Baselworld 2016, lived up to its reputation as the launching pad for global trends. The show once again was the nerve centre for more than 145,000 attendees that comprised representatives from exhibiting companies, buyers and visitors (- 3% vs 2015) and journalists (+2.3% vs 2015) from over 100 countries. At the focal point of the entire industry, Baselworld 2016 provided attendees the unique opportunity to take the pulse of the market, discover those new trendsetting collections that will prevail for the following 12 months, and equally importantly, to capitalise on the enormous business opportunities that are available exclusively at Baselworld.

Around 4,400 (+2.3% vs 2015) representatives of the press from over 70 countries attended the show. Hitting an incredible high, over 11,000 journalists from all over the world followed the livestream of the opening press conference underlining Baselworld's wide reach and universal attractiveness. With every form of mass communication represented, the incredible impact driven by Baselworld reverberated around the globe, with after-effects that will last for the next 12 months as the trendsetting innovations and creations presented here reach their final destinations and populate show windows in the most illustrious locations of the world’s metropolises.

A DYNAMIC, INSIGHTFUL AND INGENIOUS INDUSTRY

Renowned for its dynamism, insight and ingenuity, the watch and jewellery industry celebrated another successful edition of Baselworld.

Eric Bertrand, President of the Baselworld Exhibitors' Committee, was effusive about how significant this year's Baselworld was for the watch and jewellery industry. "I have witnessed how just eight days of exhibiting at Baselworld can infuse the industry with immense positivity. The favourable feedback we've received, the outstanding business opportunities available, and the massive press interest will drive us forward constructively."

Commenting on the singularity of Baselworld, François Thiébaud, President of the Swiss Exhibitors' Committee, underlined the importance of the show saying: "It is a unique place where the entire industry meets once a year – actually Baselworld is the world of watches and jewellery." Describing what makes Baselworld truly unique, Mr Thiébaud says that, "within these halls, you don't just get to meet everyone that matters, equally importantly you get to meet the spirit of creativity that you find only at Baselworld. It is only here that one gets inspired not only by the novelties showcased but also by the spectacular atmosphere that exudes pure ingenuity."

Regarding the outcome of this year's show, Mr Thiébaud said that everything he has seen and heard over the past week assures him that the watch industry is "showing a lot of confidence in the future." He underlined his conviction that the media impact created that is unique to Baselworld, "will reaffirm all the strengths and characteristics that have defined the industry for centuries and helped it surmount countless challenges."

Sharing this opinion Thierry Stern, President of Patek Philippe, agrees that: "Baselworld is always the most important event of the year in terms of meetings, in fact it is the time of year where we meet all our partners and numerous journalists around the world in a concentrated period." Mr Stern also had positive words to say about this year's show: "Baselworld 2016 was a great success for us in terms of interest in our new products."

Jean-Claude Biver, President of the LVMH Watch Division and CEO TAG Heuer, confirmed that the industry has every reason to be optimistic, saying: "Considering the political, economic, financial and monetary tensions in the world, I am still quite optimistic for 2016, taking into account our results during these days of exhibiting at Baselworld. The general atmosphere at Baselworld has shown us that this optimism for our brands is shared by many of our retailers." Regarding the value of Baselworld for the division's brands, Mr Biver clearly stated that: "Participation in Baselworld is important as we meet the entire world, and Baselworld is the gathering of all sectors of our industry."

Commenting on the essential nature of the show, Karl-Friedrich Scheufele, Co-President of Chopard, stated that: "Baselworld remains one of the most important commercial opportunities for our group in any given year. It represents a unique window to meet our worldwide business and media partners in a very condensed time frame."

"Baselworld is essential to the watch industry," said Philippe Mougenot, President, Chanel Horlogerie-Joaillerie, who qualified this statement with: "Year on year, this event is an unmatchable opportunity to expose our creativity and know-how to a qualitative gathering of international opinion leaders and high-profile watch retailers."

Benedict Sin, Chairman of the Hong Kong Jewellery and Jade Manufacturers Association, Chairman of the Jewellery Advisory Committee for the Hong Kong Trade Development Council (HKTDC), and General Manager of Myer Jewelry, Hong Kong, says: "Baselworld is the world's marketplace for the jewellery and watch industry, one that has tremendously evolved and maintained the highest quality standards." Speaking of the value of the show, Mr Sin said: "Nowhere else do we get the chance to see so many customers in just eight days. We always get new customers at Baselworld because this unique show attracts only the finest retailers." Summarising his general opinion of the show, he said: "In all the world you will not find another show of this dimension which features all the international watch and jewellery brands. And it is also actively followed by consumers around the world who eagerly await news of the trends being set at Baselworld."

Martin Heinz, Managing Partner at Jörg Heinz GmbH & Co. KG, Germany, expresses his complete contentment, saying: "Since 40 years, Baselworld has been our gateway to the world and the key to our international success. We are very satisfied with the resonance we've received, are really happy with the success of this show and already looking forward to a continuation in 2017!"

Enthusiastic about their experiences at this year's edition, retailers were forthcoming with positive comments on the myriad of business and networking opportunities that are available exclusively at Baselworld, which is what makes it the essential date in their calendar every year.

"Baselworld is most definitely the show to come to as all other ones tend to follow it while Baselworld leads it." - Willie Hamilton, Chief Executive of The Company of Master Jewellers, UK Mr Hamilton added that: "Baselworld is the centre of the universe for eight days, because it's where everybody from the watch and jewellery industry comes together on a positive note. It gives us a flavour of what's ahead of us as all the brands are launching new products, and it's also great to see the emerging brands which will be with us for the future." Commenting on the trendsetting aspect for which the show is renowned, Mr Hamilton is convinced that: "Baselworld will drive the fashion for the next 12, maybe even 24 months."

"If you want to be a leader in your market you have to be at Baselworld." - Hank Siegel, Owner and President of Hamilton Jewelers, USA. Mirroring many of the above statements, Mr Siegel underlined the fact that: "There's no other place in the industry where you can see all of the world leaders, all of the tastemakers, all of the best designers and all of the best brands in one place; that is the essence of Baselworld."

Reflecting on the successful staging of another well-received show, Sylvie Ritter, Managing Director Baselworld, said: "Baselworld put all the creativity, positivity and ingenuity that characterises the watch and jewellery industry on a pedestal to shine. These eight days at Baselworld have ignited the spark of optimism, and the industry is moving resolutely into the future with a positive spirit. Baselworld, for its part, will continue to invest in the future and strengthen its role as the one unmissable show for the world's watch and jewellery industry."