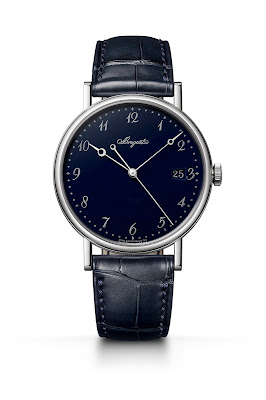 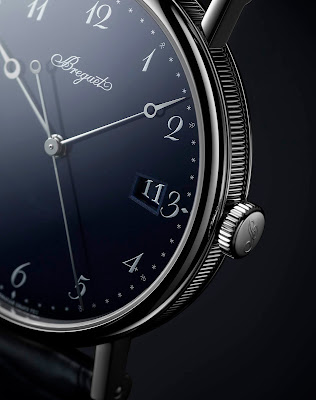 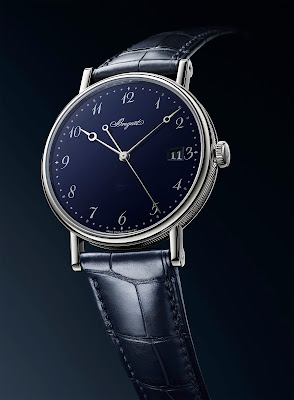 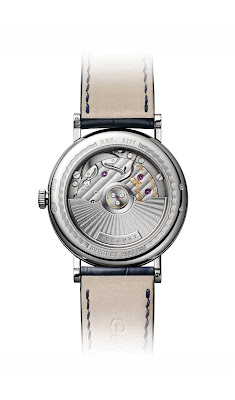 The hue of the dial echoes the color obtained during the bluing of the Breguet hands. To guarantee this exact nuance throughout the production process, the development of the pigments called for extensive research. The color needs to remain perfectly stable during firing at over 800 degrees Celsius. This is required to create a grand feu enamel, lending it a unique grain.

To ensure ease of readability, the moon-tipped hands made of rhodium-plated steel stand out against the blue background. In the same quest for readability, the Arabic numerals, stars, diamond shapes and fleur-de-lis on the chapter ring are silvered and are larger in size. Their relief is born from a very delicate, powdered tracing. The date figures are treated using the same process in order to aid visibility, due to the positioning of the aperture that sits in a darkened lower level window. Finally, Breguet’s secret signature, also in enamel, appears at 6 o’clock. For all of its timepieces with an enamel dial, the House of Breguet continues to use the calligraphy once drawn by Abraham-Louis Breguet, as featured, for example, on the self-winding Breguet No. 15 watch launched in 1787. 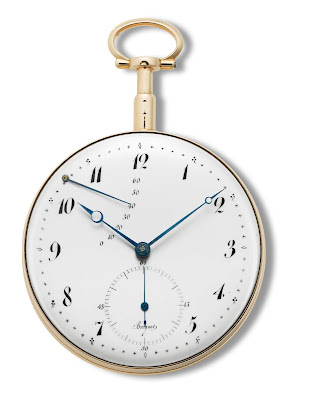 The Perpétuelle, the watch of kings par excellence

The Perpétuelle is the name used by Abraham-Louis Breguet to describe his self-winding watches. The perfection of this system was the first major success of his career, at a time when several of his contemporaries were engaged in work on the problem without achieving any convincing results. Breguet became the first to discover, through his oscillating platinumweight watch, a formula that would produce a reliable result. His first Perpétuelle was sold to the Duc d’Orléans in 1780, and from this time his self-winding watches were to bring him considerable fame both at the court of Versailles and throughout Europe. Unique in its time, both technically and aesthetically, the Perpétuelle – the watch of kings par excellence – remains today one of the most powerful symbols of the phenomenal creative genius of its inventor. The earliest of Breguet self-winding watches to have survived, the Breguet perpétuelle repeating watch no. 1/8/82, was completed in 1782. The oscillating platinum weight rewinds the watch automatically. 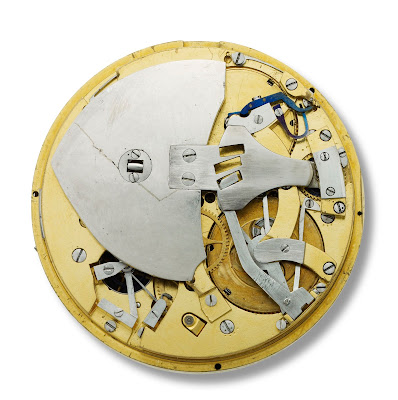 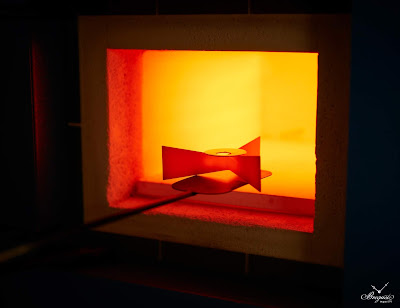 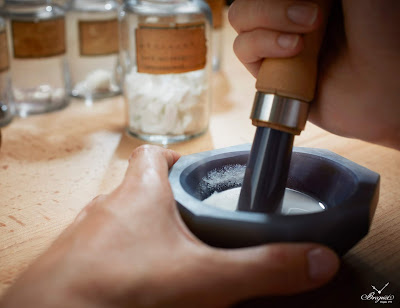 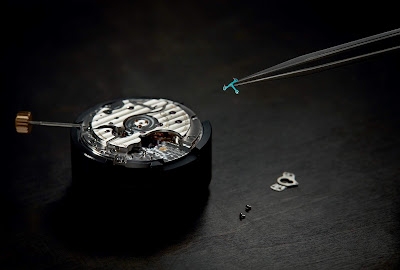 The perfect marriage of refined aesthetics and high technology

Powered by the self-winding 777Q mechanical caliber, the Classique 5177 Grand Feu Blue Enamel model has simple and useful functions: the central second hand and the date at 3 o’clock. Current technological advances such as the use of silicon for the lever and escape wheel optimize its chronometric reliability. However, certain aesthetic elements of this caliber, in particular the form of the wheels, are reminiscent of Breguet’s creations from the late eighteenth century.

Characteristic of a self-winding movement, the rotor in engine-turned 18-karat gold appears through the sapphire-crystal caseback. Similarly, each of the components – visible or invisible – is delicately finished by the craftsmen of the Breguet Manufacture with techniques such as chamfering, circular graining, and brushing, or with the côtes de Genève.

The 777Q caliber fits into a slim case in white gold with fluted sides. True to the Breguet style, the lugs are welded and rounded toward the midnight blue alligator leather strap. Finally, an individual number is engraved on the back of each watch, marking it unique to its owner. In turn, the owner can have their name recorded in the Breguet registers that have been kept since 1780 – as a contemporary sign of their taste for timeless elegance. 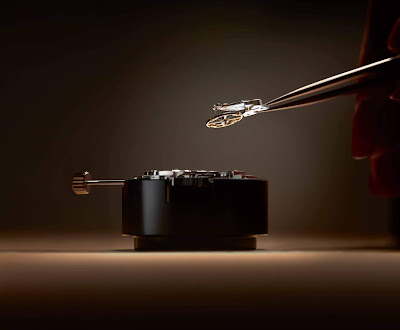 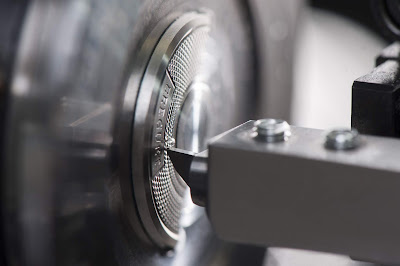 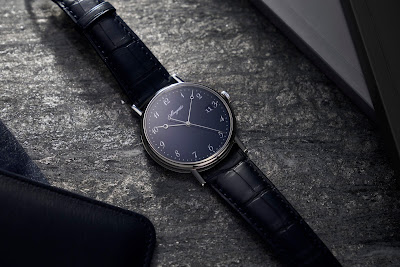 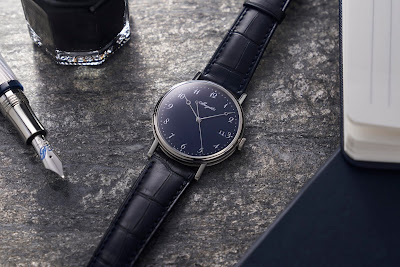