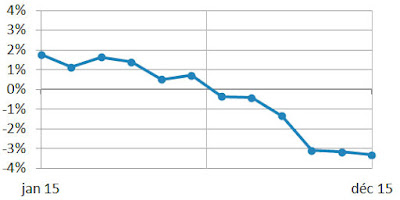 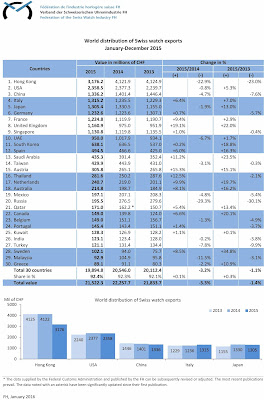 The Swiss watch industry faced a more complex and difficult environment in 2015. It recorded its first downturn since 2009. The total value of watch exports was 21.5 billion francs, a decline of 3.3% compared to 2014. As a consequence, the annual result was virtually back on a par with the level of 2012, following two consecutive years of consolidation. Development of the Hong Kong market weighed heavily in the overall balance.

The situation regarding watch exports deteriorated steadily during the year 2015, falling from +3.2% in the first quarter to -7.3% in the fourth quarter. The second quarter brought into focus most factors affecting the branch and fell well short of its 2014 level (-6.8%), while the first half-year as a whole remained slightly positive (+0.5%).

The general context did few favours for the branch. Overvaluation of the franc, the sudden readjustment affecting Hong Kong, the economic slowdown and political decisions in China, tensions in the Middle East, the low level of the rouble and terrorism were all factors which undermined the forecast of stability announced a year ago. This situation will continue to influence results for the Swiss watch industry in the first part of 2016, which moreover will suffer from a generally unfavourable base effect. Consequently, watch exports are likely at best to achieve the same value this year as in 2015. Visibility however is poor.

Watches generated a value of 20.2 billion francs, accounting for nearly 95% of all exports. They registered a decline of 3.6% compared to 2014. In volume terms, the downturn was more moderate at -1.6%. With a total of 28.1 million timepieces exported, volumes reverted to their 2013 level. In total, 460,000 fewer watches left Switzerland in 2015.

Mechanical watches generated 80% of export sales. Their value fell by 2.0%. Quartz timepieces recorded a more mixed result, with a decline of 9.9%.

During the year 2015, the fifteen main markets showed the following trend (total value in million francs and % variation by comparison with 2014):

Asia was the leading market for Swiss watchmakers and absorbed exactly half of exports by value. It recorded a sharp decline (-9.1%). Europe, accounting for one third of sales, registered a healthy increase of 6.1% compared to 2014. Growth on the American continent suffered a reverse from September onwards and ended the year on a negative note (-1.9%).

2015 was a very difficult year for Swiss watch exports to Hong Kong. Their value fell by nearly a quarter (- 22.9%), exerting a strong negative effect on the result worldwide. The local market underwent a major readjustment linked in particular to exchange rates and consumer trends. After a period of steady growth until August, the United States registered a sharp decline to end the year virtually unchanged (-0.8%). The situation in China showed an improvement compared to last summer, but overall returned a negative result (-4.7%). The main European markets all showed gains compared to 2014. Italy (+6.4%) continued its very favourable progression and Germany (+0.7%) returned to the black despite a severe setback at the end of the period. France (+9.4%) experienced a particularly dynamic summer before losing ground in November and December, linked to the consequences of terrorism which probably also affected its neighbours. The United Kingdom (+19.1%) outperformed all other markets and registered steady growth throughout the year. After several months of marked slowdown, Japan (-1.9%) remained stable and ended the year with a moderate decline. In the Middle East, the main markets presented a mixed profile: in value terms, the United Arab Emirates registered a decline of 6.7%, while Saudi Arabia recorded an increase of 11.2%. The MERS epidemic left its mark on South Korea (+0.2%), which just managed to end the year on a positive note.
Publicada por Fernando Correia de Oliveira à(s) 08:56