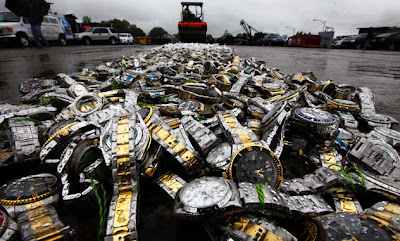 The fight against counterfeit watches has made progress this year, but more needs to be done to crack down on the trade in timepieces which abuse the “Swiss made” label, according to the Federation of the Swiss Watch Industry.

A total of more than 120,000 fake watches were seized in 2013, the federation president, Jean-Daniel Pasche said.

“The results are encouraging, but we have to remain vigilant,” Pasche told the Swiss News Agency.

In a spectacular raid on warehouses in Dubai, local police confiscated about 90,000 fake Swiss watches in 2013. In separate operations, thousands of counterfeit products were also seized by the authorities in Italy and in Russia.

Pasche said the federation was notified of a haul of counterfeit watches by police in a province in northern China. He said a free trade deal between Switzerland and China would help to step up the fight.

In addition, the federation has seized about 700,000 counterfeit watch components this year.

Pasche said the fight against fake watches was crucial for the credibility of the Swiss watch brands and the industry. Record exports

The federation says 2013 could set a new record with watch exports increasing for the third consecutive year, despite a slump in sales to China.

China, including Hong Kong, remains the most important market for Swiss watches.

Sales in other European countries have increased this year, making up nearly a third of all watch exports, according to Pasche.