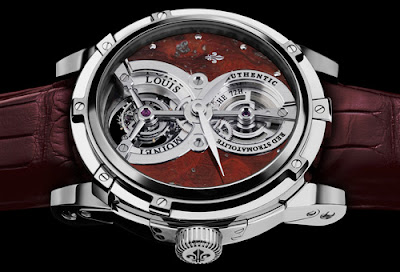 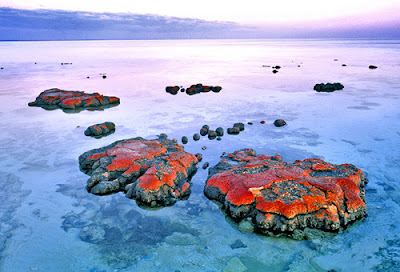 Stromatolites are limestone structures formed by the trapping and binding of particles by microorganisms. The oldest fossils known on earth, they go back 3.5 billion years. Their name comes from the Greek words STROMA (carpet) and LITHOS (stone). Secret Stromatolites Dating from the origins of life on Earth, stromatolites are among the planet’s most ancient fossils. They may even have been the only form of life until around 550 million years. Stromatolites helped create an atmosphere rich in dioxygen, which allowed the development of new forms of life. They dominated marine life between 3,500 and 500 million years, before more complex forms of life, such as molluscs and crustaceans, brought about their decline in the late Precambrian era.

The Red Stromatolite by Louis Moinet The red stromatolite used by Louis Moinet is an extremely rare material, now existing in only a handful of places on Earth. In this case, it comes from Western Australia, where it is found in shallow, hypersaline lakes and lagoons that are inhospitable to most other organisms. Formed from cyanobacteria, commonly known as blue-green algae, it developed in temperate aquatic environments, much like coral.

Daniel Haas is a world specialist in the selection and cutting of rare and precious stones, with unique skills and knowledge. His work is extremely precise, with tolerances comparable to the width of a human hair. The first step in creating the exceptional quality of the Red Stromatolite dial is to make a series of cuts, in order to select the most spectacular portions of the fossil. Being fragile, the material must be treated with the utmost care; here Daniel Haas’ expertise has proved invaluable.

Perhaps the most remarkable aspect of his work is that it remains a craft, exercised through Daniel’s incomparable skill and aided by his unique equipment. He personally made many of his instruments for use by himself and his father, some of them as much as thirty years ago. These craftsman’s tools, such as the diamond grindstone and the stonecutter, were further improved by Daniel in order to optimise his work. They allow him to exert the precise amount of pressure required - sometimes nearly imperceptible - determined by his unique feel for the material.

Here, in an exclusive interview, he speaks of his passion for his craft:

Daniel, most stromatolites are dark coloured or green. Why is this one red?

The red colour comes from iron oxide, which is rarely found in stromatolites.

What are your feelings as you transmute the oldest fossil on Earth into a work of art?

It is always extremely moving to work on a “piece of eternity”, so incredibly ancient, while seeking to create a product that is a work of art.

What is the trickiest part of the work?

Each step is demanding, but the last stages are actually the most dangerous. After dozens of hours of work have been put into manufacturing a stromatolite dial, it would be terrible to ruin everything in the last phases! One of these is the final cutting of the piece, done by ultrasound. The piercing takes over an hour and a half. The piece is naturally cut and polished completely by hand, which requires a very delicate touch. The last operation consists in polishing the surface and fitting the stone in its brass base; this is done with a small milling cutter. This final stage is in fact one of the most perilous, for the thinner portions of the fossil can easily break. The shape of the Tourbillon Vertalis dial, with its fragile extremities, is particularly challenging ; this makes the task even more difficult.
Publicada por Fernando Correia de Oliveira à(s) 15:07