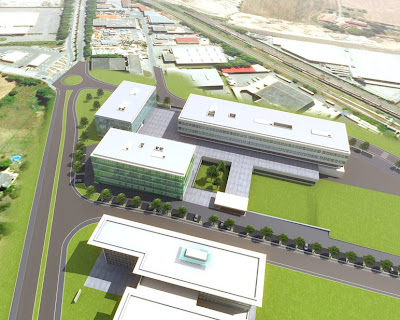 Inspired by its unique watchmaking heritage in Geneva, willing to ensure the sustainability of the profession, and motivated by the increasing demand for exceptional timekeepers, Richemont is launching a large and innovative project: the « Campus Genevois de Haute Horlogerie ».

The Group reinforces its roots in Geneva and its involvement in the local economy with an investment of over 100 million Swiss francs. The project will result in the creation of a 30,000 sqm integrated work site in Meyrin, built in accordance with ambitious environmental and socially responsible standards. The total Campus population should reach 900 by 2020, with 400 new staff being hired between now and then.~

The Campus will bring together several major high-end Geneva watchmakers in their own premises: the headquarters of the Maison Roger Dubuis, the watchmaking workshop of the Maison Van Cleef & Arpels, production workshops of Vacheron Constantin and the « Manufacture Stern, Genève 1898 ». Stern Création – manufacturer of high-end dials – and the Manufacture Genevoise de Haute Horlogerie – specialised in components of watch movements, 100% Hallmark of Geneva – will join forces to enhance the technicality and creativity of their products.

At the heart of the Campus, a brand new concept will come to life to develop the capabilities of our Maisons: the Learning and Apprenticeship Centre for Haute Horlogerie. With 45 seats available from the start and the ability to deliver official certifications, the Centre will ensure the sustainability of the watchmaking profession and of traditional craftsmanship, the recognition of our Maisons' legacy, and the development of the Group's employees. In addition, the Campus will host a Research Centre for Watchmaking, with the mission to develop new technologies to sustain the impressive level of innovation and quality of our Maisons. Richemont will invest approximately 60 million Swiss francs on training and research over ten years.

While each entity will preserve its independence and autonomy, the objective of the Campus is to promote interaction and exchange, and enable the transformation of ideas into extraordinary products, such as those bearing the prestigious Hallmark of Geneva.

Richemont would like to thank the State of Geneva, and more specifically the Department of Public Education, for its active participation in the creation of the Learning and Apprenticeship Centre for Haute Horlogerie, due to open in autumn 2012. The Learning Centre is the cornerstone of the Campus which will be inaugurated in autumn 2014.

Richemont owns a portfolio of leading international brands or ‘Maisons’, which are managed independently of one another, recognising their individuality and uniqueness. The businesses operate in four areas: Jewellery Maisons, being Cartier and Van Cleef & Arpels; Specialist watchmakers, being Jaeger-LeCoultre, Piaget, IWC, Baume & Mercier, Vacheron Constantin, Officine Panerai, A. Lange & Söhne and Roger Dubuis, as well as the Ralph Lauren Watch and Jewelry joint venture; the Montblanc Maison; and Other, being Alfred Dunhill, Lancel, Net-a-Porter and Chloé as well as other smaller Maisons and watch component manufacturing activities for third parties.
Publicada por Fernando Correia de Oliveira à(s) 11:35