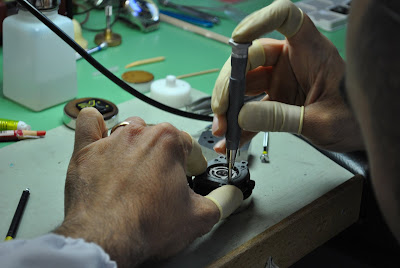 The Swatch Group will be providing fewer watch movements to its competitors as of January 1, 2012 following a recent Swiss legal ruling.

Swatch and independent watch brands are locked in a fight over Swatch’s supply of components to third parties. One analyst believes the decision could be damaging for some small firms.

On Monday the Federal Administrative Court rejected an appeal by nine watchmakers, including Louis Erard, Frédérique Constant and Sellita, against the Federal Competition Commission (Comco) ruling on December 15 allowing Swatch to reduce its supplies next year to 85-95 per cent of 2010 levels.

Swatch, best known perhaps for its colourful plastic watches, also owns higher-end brands such as Breguet and Omega, as well as the firm ETA, which makes movements fitted in about 80 per cent of Swiss watch brands.

He feels it is high time other Swiss watch manufacturers step in to invest more in technology and innovation to produce watch micro-components. Swatch believes other manufacturers are not doing enough to upgrade their machinery and processes and therefore do not share risks.

Hayek said Swatch would not stop providing for the industry but wanted to reserve the right to choose with whom they worked.

"We do not want to be a supermarket, forced to deliver to everyone whatever they want. The supermarket era is coming to an end," he told the Wall Street Journal.

Swatch views its move to gradually reduce the offer of watch components as an opportunity for firms to transform themselves rather than a disaster for the industry.

However, several watchmakers worry about finding substitute suppliers quickly enough so that their own production does not suffer.

"With this decision, we will be under pressure from January because of the income cut as we will receive fewer components and, at the same time, will have to invest in our production," said Peter Stas, head of Frederique Constant.

Watch movement maker and assembler Sellita told Reuters last month it expected production to fall 25 per cent next year because of the delivery cuts, but declined further comment on Monday.

Jon Cox, a Kepler Capital Markets analyst, said the news was positive for Swatch and for large companies that can make their own mechanisms, like Rolex, Patek Philippe, and “good for Richemont, which has a good relationship with Swatch”.

But the decision could be harmful for firms like LVMH Moët Hennessy - Louis Vuitton and Chanel SA, which don't have the same production capacity, and for smaller companies that don't have the resources to build capacity, he added.

"Some of the smaller players will go bust, while Swatch will be able to increase its market share further in mechanical watches," he said.

The legal decision was announced as Comco pursues an investigation launched in June into the Swatch Group. Its purpose is to determine whether or not the watchmaker’s plans to stop supplying the competition with mechanical movements violate antitrust laws.

“While the investigation is going on Comco agreed to provisional measures that comply with friendly rules in accordance with Swatch. We are trying to avoid lasting damage to competitors that don’t produce their own components,” Comco spokesman Patrik Ducrey told swissinfo.ch.

Ducrey said the investigation’s conclusions should be ready in the second half of 2012.

In 2012 Swatch will produce some 5.5 billion of the eight billion internal watch components required by the watch industry for its annual output.

Watchmakers still have a few months to decide whether to lodge an appeal against the Swatch ruling with the Federal Court.
Publicada por Fernando Correia de Oliveira à(s) 12:31