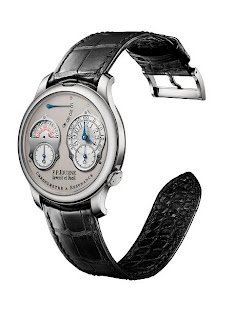 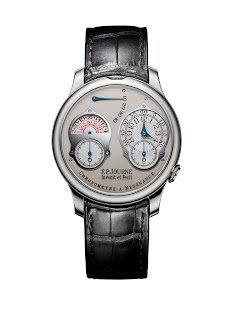 An emblematic timepiece that will significantly mark the research on precision made by master watchmaker François-Paul Journe. This unique watch represents one of the wildest challenges ever in the field of the mechanical watch! Utilising the natural resonance phenomenon, this exceptional mechanism revolutionized the classic standards of watch-making by offering an unequalled precision for a wristwatch.

The first applications of the resonance phenomenon in horological science date back to the 18th century, by French master watchmaker Antide Janvier (†1840). He observed the negative effects of these waves on clocks and then conducted his own research on ways of using this phenomenon in the operating of regulators.

In 2004, F.P.Journe introduced a second version for the Chronomètre à Résonance with the introduction of the first movement ever made in 18K rose gold, a specification that would from then on apply to all the precision chronometers of the brand.

2010 – F.P.Journe offers a new face to the renowned Chronomètre a Résonance, acclaimed by collectors and professionals of the brand worldwide. In an ultimate quest for precision, the dial at 9h now offers a time indication of 24 hours, defining precisely the hours of day and those of night. The dial at 3h in silver guilloche indicates the local time but can also be used for the same time zone.

Hardly a small modification for the subtle 18K rose gold mechanism with its two perfectly synchronised beating mechanical hearts that are revealed through a sapphire crystal case-back: there is now a different gear transmission making the hands turn in 24 hours instead of 12 hours.