The Swatch Group, the world’s biggest watchmaker, has revealed that it will relocate a subsidiary from the Portuguese tax haven of Madeira to Switzerland.

Foreign companies operating in Madeira have been exempt from paying taxes, but the archipelago has announced plans to change its tax laws by the end of this year.

A spokeswoman for the Biel-based group, Beatrice Howald, said changes to Madeira’s tax laws were a factor, but not the only reason, the company had decided to close its Sociedade Unipessoal subsidiary.

“The subsidiary serves as a platform for centralising the activities of the group in the European market,” said Howald, confirming information published in the German business journal Handelszeitung.

“It was created during a time when the euro didn’t exist. Today it is simpler to undertake these activities in Switzerland.”

The Swatch group said 12 employees would be affected by the change, half of whom would be offered jobs in Switzerland. 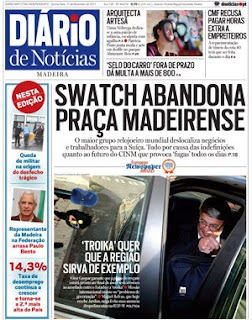