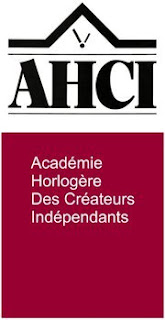 "It is a real honour to welcome these prestigious watchmakers. The AHCI coming to GTE is part of the logic and continuity of our mission: promoting the art of making time in Geneva and beyond its frontiers", quotes Florence Noël, Show Director.

The AHCI was honoured at the 2010 Grand Prix d'Horlogerie de Genève when its members were awarded the Special Jury prize for an outstanding contribution to fine watchmaking.

Pioneer of the Geneva Time Exhibition adventure, Antoine Preziuso comes back to the Fair with a very unique artpiece called GTS - Grand Tourbillon Sport. When many brands wish to conquer space, Antoine Preziuso keeps both feet on the ground and feeds his passion for racing, by reinterpreting his tourbillon movement in a housing designed c ase, made of a sleek new material, the "ChromeCobalt".

Sven Andersen is sometimes named "the Watchmaker of the Impossible" because he surprises the world with amazing creations and inventions. Remember the exploit of the "Bottle Clock", created in 1969, of the "1884", a worldtime watch that tells the fascinating story of the inventor of the 24 time zones, or the "Hebraïka", a wristwatch with the Jewish calendar which Svedn has created with Alain Silberstein... Real mechanical horlogical exploits. And an amazing artist.

Marc Jenni never wanted to become a watchmaker. Well, fortunately for all the timepieces lovers, he began at the age of 16 a watchmaker's apprenticeship and started a carrier in New York at Tiffany & Co. In 2008, he felt ready to establish his own company. For its first venue to GTE, Marc Jenni will present his creations "Prologue" equipped with a black ring that rotates around the entire watch case, and "JJJ", which will remind the wearer of the planets associated with the days of the week.

Since 1972, Jean Kazes made a name for himself in pendulums and sculptural clocks. These one-off pieces illustrate the purity of both simple movements or complications (perpetual calendars, astronomic scenes, universal time, striking the hours...). These works of art are a symbol of the fine balance struck between a thorough mastery of the traditional watchmaker's craft and contemprary aesthetics.
Publicada por Fernando Correia de Oliveira à(s) 14:29