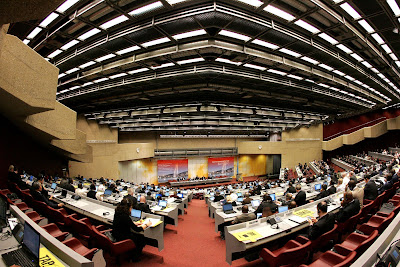 Geneva, 19 January 2012 – The ITU Radiocommunication Assembly has reached an important decision to defer the development of a continuous time standard in order to address the concerns of countries that use the current system of the leap second in Coordinated Universal Time (UTC).

The decision has been reached to ensure that all the technical options have been fully addressed in further studies related to the issue. These studies will involve further discussions within the ITU membership and with other organizations that have an interest in this matter and will be referred to the next Radiocommunication Assembly and World Radiocommunication Conference scheduled for 2015.

Adjustments made in one second steps, known as ‘leap seconds’, have been implemented since 1972 to compensate for variations in the speed of the earth’s rotation within the framework of Coordinated Universal Time (UTC).

UTC is defined by ITU’s Radiocommunication Sector and is maintained by the International Bureau of Weights and Measures (BIPM) in cooperation with the International Earth reference and Rotation Service (IERS). Measurements from timing centres around the world are used in the determination of UTC, which is adjusted to within 0.9 seconds of Earth rotation time (UT1) by IERS-determined values of the Earth’s rotation.

The suppression of the leap second would make continuous time scale available for all the modern electronic navigation and computerized systems to operate with and eliminate the need for specialized ad hoc time systems. This however may have social and legal consequences when the accumulated difference between UT1 – Earth rotation time – would reach a perceivable level (2 to 3 minutes in 2100 and about 30 minutes in 2700).

ITU Secretary-General Hamadoun Touré considered the decision taken by the Radiocommunication Assembly will ensure that all stakeholders have been adequately associated with a step which will clearly influence our future.
Publicada por Estação Cronográfica à(s) 21:04

As a Newbie, I am permanently exploring online for articles that can be of assistance to me. Thank you
Airaid 310-970 M.I.T. Modular Intake Tube