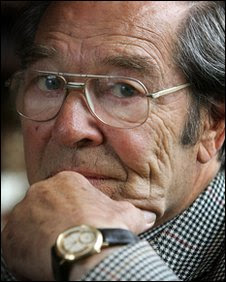 George Daniels, por muitos considerado como o mais importante relojoeiro da actualidade, foi recentemente feito Comandante do Império Britânico - Commander of the British Empire (C.B.E.), pelos serviços prestados à Relojoaria.
O inventor do escape co-axial e construtor de importantes peças de bolso e de pulso, com soluções inéditas para várias complicações relojoeiras, continua a trabalhar, aos 83 anos. E a repartir a paixão pelos relógios com o das corridas de automóveis. "Só que já não me deixam correr, devido à idade", lamenta-se ele, em entrevista à BBC.
A entrevista:
Dr George Daniels, a watchmaker from the Isle of Man, has been awarded a CBE for services to horology, the science of making timepieces.
In an illustrious career spanning 60 years, the 83-year-old from Ramsey has been responsible for some of the most important advancements in his field.
The most successful of his inventions, the co-axical escapement, won him international acclaim.
Dr Daniels has won numerous awards and now writes and lectures on his subject.
As a young man Daniels was fascinated by the importance of accurate time telling for sea navigation. He has spent his working life pursuing this interest.
"In my career I wanted to make English watches the most superior, which they always were, and we have achieved that here on the Isle of Man," he said.

"The watches we are producing on the Island are the most technically advanced in the world."
Britain has a rich history in chronometry.
"As an island we needed to navigate our ships. So the philosophy grew up with the English from about 1760 onwards, to endeavour to improve the performance of the watch," said Dr Daniels.
"Ships would navigate by them and many ships were lost, simply because the crew or captain lost their way and couldn't rediscover it without an accurate time keeper.
"This philosophy appealed to me and so I simply carried it on realising that for the past 300 years nothing serious had happened in watch-making".
Dr Daniels, the Isle of Man's own timelord, thought it was time to reinvestigate the possibilities and continue the search for better time keeping.
Every one of his 37 watches has been made from scratch and from raw materials, a task which includes mastering more than 30 separate skills.
"The watches are handmade and no two components are interchangeable, each watch has it's own unique characteristics," said Dr Daniels.
"We have made some incredibly accurate performances and it is all a matter of adjusting, weighing, considering and modifying every aspect of the watch."

One of the Ramsey man's most famous watches, the Daniels Space Watch, was designed to commemorate the first moon landing.
It was designed especially for space navigation.
"It gives solar time, mean time, moon time, equation of time, moon phases and centre seconds. It is a highly versatile watch which could guide you through your package tour to Mars, which one day will happen," he said.
When he is not designing watches he likes to spend time with motorcars. "The RAC say I can no longer race but I can still take part in hill climbs here on the island.
"Old motor cars are every bit as interesting as old watches. My two passions in life are watches and old sport's cars - I can see great merit in both.
"Each is full of mathematics, physics, and judgement, calculations which all adds to the challenge and ultimately the enjoyment".
Um pequeno filme da BBC com George Daniels pode ser visto aqui.
Publicada por Fernando Correia de Oliveira à(s) 17:06